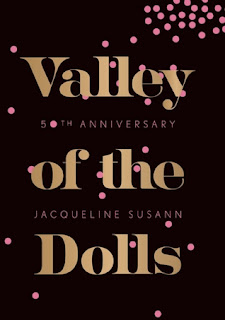 Other Titles by this Author: Every Night, Josephine!, The Love Machine, once is Not Enough, Dolores, Yargo

Dolls: red or black; uppers or downers; washed down with vodka or swallowed straight – for Anne, Neely and Jennifer, it doesn’t matter, as long as the pill bottle is within easy reach. These three young starlets climb to the top of the entertainment industry – only to find that there is no place left to go but down, into the Valley of the Dolls.

Valley of the Dolls is one of those books that I feel like I've always been aware of, or its reputation anyway, and so I jumped at the chance to be part of the blog tour celebrating its 50th anniversary.

We join Anne in 1945 after she’s fled her small mid-western town to New York City where she secures a job in a talent agency. Anne is beautiful, charming and mostly unaware of her charms and soon catches the eye of a millionaire. She quickly becomes entrenched in the world of Broadway and its stars, but she remains down to earth and relatively sane in a cruel industry.

It’s no secret that stardom, whether it be film, TV or stage, can be a poisonous one, especially in regards to women. The fear of aging, being only respected and regarded for beauty, the fight for money and success and to maintain the body of a teenager are damaging and relentless. And so came the dolls. Their reliance on sleeping pills washed down with liquor was scary and it made Neely a horrible person.

Neely was truly vile. Nothing that anyone did for her was enough, she was obsessed with her status as a star and I hated her. So very much. Jennifer I felt sorry for. Her story pretty much broke my heart by the end – I didn’t expect such a punch in the stomach from this book but I got really involved with Anne and Jennifer. Anne’s romance with Lyon was also more heartbreaking than I had imagined! I just really, really wanted her to let him go and move on.

The journeys of these three very different women is so, so compelling. It’s juicy, glamourous, gritty and dark and I loved it. It would have scored five stars from me if it wasn’t for the outdated (and often offensive) language used when talking about LGBT people and the attitudes towards women and marriage. That really dated the novel and made me feel quite uncomfortable sometimes, but I do understand that language is because of it being 50 years old.

Thanks to Virago for the review copy. Make sure to check out the rest of the stops on the tour!


Sophie
Posted by So Many Books, So Little Time at 23:06
Email ThisBlogThis!Share to TwitterShare to FacebookShare to Pinterest