London Belongs to Us, Sarra Manning 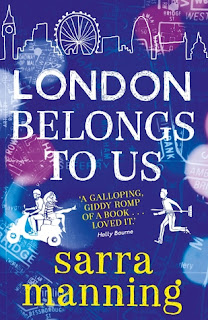 Other Titles by this Author: Guitar Girl; Diary of a Crush: French Kiss, Kiss and Make Up, Sealed With a Kiss; Let’s Get Lost; Pretty Things; Fashionistas: Laura, Hadley, Irina, Candy; Nobody’s Girl; Unsticky; You Don’t Have to Say You Love Me; Top Ten Uses for an Ex-Boyfriend; Adorkable; It Felt Like a Kiss, After the Last Dance

I'm a huge fan of Sarra Manning’s books so I obviously went into London Belongs to Us with high expectations. And obviously it was brilliant.

I've been hearing for weeks what a love letter to London this is and that couldn’t have been more spot on. Sunny lives in Crouch End but journeys from Crystal Palace to Soho to Notting Hill and finally, to Ally Pally in one night of adventure, heartbreak, making unexpected friends and embracing her true self. I’ve always lived just over an hour from London so I’ve spent a lot of time in our capital, but I can’t help but feel I've missed out from not living there.

I really loved getting a quick history on the London boroughs that Sunny visited at the beginning of the chapters – they were a lot of fun. And there were also lists and pie charts scattered between which is always really fun to include in a novel. As Sunny romps through London she bumps into familiar faces for long-time Sarra Manning readers. We catch up with Jeane from Adorkable who’s still ruling the social media world and Molly from Guitar Girl, her first YA novel. It was SO good to catch up with her and I was pleased I made the connection considering it’s been over 10 years since I read Guitar Girl!

The people Sunny meets and the adventures she goes on during the night make her wake up to the person she’s been with Mark. A lesser, squashed-down version of herself and I was nearly cheering every time she stood up for herself or took a risk, and by the end I was so in love with her it’s a bit ridiculous. I want Sunny to be my friend.

London Belongs to Us is a heart-warming, joyous romp and I couldn’t have loved it more if I tried.

Thanks to Hot Key Books for the review copy.