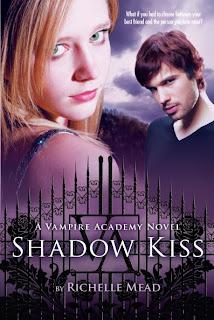 Shadow Kiss: A Vampire Academy Novel - Richelle Mead
Pages: 443
Publisher: Razorbill
Release Date: 13th November 2008
Other Titles in the Series: Vampire Academy (my review), Frostbite (my review), Blood Promise (25/08/09)
What if following her heart means Rose could lose her best friend forever?
Rose Hathaway knows it is forbidden to love another guardian. Her best friend, Lissa - the last Dragomir princess - must always come first. Unfortunately, when it comes the gorgeous Dimitri Belikov, some rules are meant to be broken…
But since making her first Strigoi kills, Rose hasn’t been feeling right. Something dark has begun to grow in her mind, and ghostly shadows warn of a terrible evil drawing nearer to the Academy’s iron gates. And now that Lissa and Rose’s sworn enemy, Victor Dashkov, is on trial for his freedom, tensions in the Moroi world are higher than ever.
Lying to Lissa about Dimitri is one thing, but suddenly there’s way more than friendship at stake. The immortal undead are on the prowl, and they want vengeance for the lives that Rose has stolen. In a heart-stopping battle to rival her worst nightmares, Rose will have to choose between life, love, and the two people who matter most…but will her choice mean that only one can survive?
Wow! Shadow Kiss was fantastically amazing. It’s hard to put into words how much I loved it.
I was very worried about Rose in Shadow Kiss. Everything that was effecting her became steadily worse and I was just waiting for her to finally snap. This feeling only intensified as we learned more about Anna and the nature of her relationship with St. Vladimir and it’s similarities to Rose and Lissa’s.
Something that struck me repeatedly in Shadow Kiss was how oblivious Lissa was to how Rose and Dimitri felt about each other and also how unwilling Rose was to tell her. Rose’s need to protect those she loves trumps every other aspect of her life, right down to not telling her best friend about the guy she loves just in case it gets out somehow. She is the type of person that would lay down their life for someone but also seems terrified of letting anybody in.
But the ending. Oh my god, the ending. I was left reeling, in complete and utter shock. The Ravenous Reader told me that Shadow Kiss tore her heart out. I wasn’t quite prepared for how right she was. I haven’t stopped thinking about it since and I still can’t get my head around it. It totally blew me away.
I am literally aching for Blood Promise now. Roll on August!
Sophie
Posted by So Many Books, So Little Time at 12:45
Email ThisBlogThis!Share to TwitterShare to FacebookShare to Pinterest