Jessica's Guide to Dating on the Dark Side - Beth Fantaskey 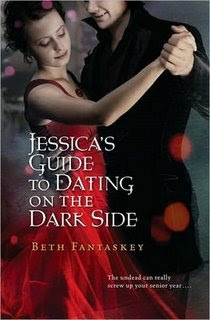 Jessica’s Guide to Dating on the Dark Side - Beth Fantaskey
Pages: 351
Publisher: Harcourt Mifflin
Release Date: February 2009
Marrying a vampire definitely doesn’t fit into Jessica’s senior year “Get-a-Life” plan.
Enter a bizarre new exchange student named Lucius Vladescu who claims Jessica is a Romanian vampire princess by birth and he’s her long lost fiancée. He’s arrogant, officious, embarrassingly overprotective, and well, incredibly hot.
Armed with a copy of Growing Up Undead: A Teen Vampire’s Guide to Dating, Health, and Emotions, Jessica tries to imagine the transition from an average American teenager to a glam European vampire princess. But just when things start to heat up with Lucius, a devious cheerleader sets her sights on him.
Soon Jess finds herself fighting to win back her wayward prince, stop a global vampire war - and save Lucius’s soul from eternal damnation. All of which leaves her to wonder: Wouldn’t life be easier if she could just fall for a nice mortal boy?
Jessica’s Guide to Dating on the Dark Side is Beth Fantaskey’s stunningly addictive debut.
Lucius is a fascinating character. In the beginning I found him hard and serious which made him difficult to figure out and get to know. His seriousness and formality made him seem very out of place, though it’s contrast with the other characters also made him very funny. I also liked (most of the time) how Lucius grew and changed and how we got to see this first hand in his letters to his Uncle Vasile. However, there was still lots of mystery surrounding him, I felt that he was holding something back which preventing me from fully understanding him.
The raw power and real danger of the vampires was clearly demonstrated in Jessica’s Guide to Dating on the Dark Side. I liked how Lucius put all of the humans on edge as a powerful and dangerous vampire should and that they reacted to him accordingly. The fact that Jess rejected the idea of vampires until she was presented with undeniable evidence was a very realistic reaction to something so seemingly impossible.
One of my favourite elements of Jessica’s Guide to Dating on the Dark Side is Jess herself. She is just a regular girl trying to get through high school whose world is turned upside down by a gorgeous and intimidating Romanian vampire prince. As well as changing her life, he changes her too. Lucius helps Jess to embrace her curves (I love it when the heroines aren’t tiny!) and her ‘presence’. He helped her to grow up and realise that not everything can be explained by science and logic. I really loved that her maturation was gradual and she sometimes relapsed; she is a teenager after all!
I loved Jessica’s Guide to Dating on the Dark Side and I really hope that Beth Fantaskey writes a sequel. Until then I’m eagerly awaiting her second novel, Jekyll Loves Hyde, which comes out next Spring.
Sophie
Posted by So Many Books, So Little Time at 17:58
Email ThisBlogThis!Share to TwitterShare to FacebookShare to Pinterest