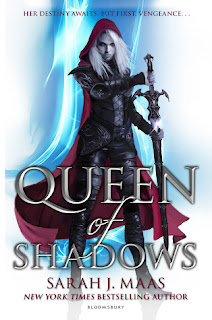 Other Titles by this Author: The Assassin’s Blade, Throne of Glass, Crown of Midnight, Heir of Fire, A Court of Thorns and Roses

No masters.
No limits.
No regrets.

Celaena Sardothien is cloaked in her assassin’s hood once more. She is back in Rifthold, but this time she is no one’s slave. She must delve into her most painful memories and fight for her survival, while resisting a smouldering passion that might very well consume her heart. And she will face her former master, the King of Assassins, again – to wreak revenge for a decade of pain…

THERE WILL SPOILERS AHEAD FOR THE FIRST THREE BOOKS IN THE SERIES, BUT NONE FOR QUEEN OF SHADOWS! YOU HAVE BEEN WARNED!

As Queen of Shadows only came out yesterday, I’m going to make sure this review is spoiler-free. It’ll be very vague and very likely that you’ll have no idea what I’m talking about unless you’ve read it already!

Celaena’s fourth adventure begins as she steps off the ship from Wendlyn into Rifthold’s port and she has a mission. It’s a new Celaena returning to where she started, she’s now Aelin Ashryver Galathynius, Queen of Terrasen. As always, Sarah J Maas’s characterisation is second to none. Every character under her talented hands goes through a different arc in their life/personality/position in each instalment of this series, sometimes for the better and sometimes for the worse, but it all still adds up to a fully rounded, authentic character. I think that this was particularly true for Chaol and Lysandra in Queen of Shadows and I loved the journeys they went on.

Some real antagonists were taken down in this book which all of the expected aplomb, and a few heart attacks from me, along the way. They were satisfying and needed; I’m glad they weren’t all left until right at the end, it may have felt a little drawn out and anti-climactic after over 600 pages otherwise! But don’t let that fool you that all was well at the close of Queen of Shadows – Aelin and the gang a lot of trouble ahead of them and I can only hope that they all make it out alive…

Manon and the Blackbeak witches were introduced in Heir of Fire and I was really pleased to see them back and more awesome than ever in Queen of Shadows – I have a strange fondness for them… I loved how much more page time they got this time around. It allowed me to get to know Manon and her Thirteen a little better and begin to figure out how they would play in to the brewing battle on Aelin’s hands.

But I really can't say much else with spoilers so, in summary, as my friend Kate said: “Perfect. No words. Too many feels.” I think she pretty much hit the nail on the head. Enjoy.

Thanks to Bloomsbury for the review copy.