Blast from the Past: Dr Jekyll and Mr Hyde 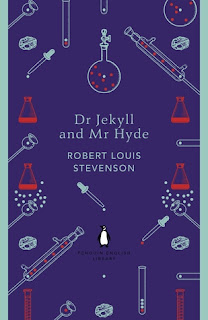 My edition: the beautiful Penguin English Library paperback which is a bind up of Dr Jekyll and Mr Hyde and The Bottle Imp

What’s it about?
‘All human beings, as we meet them, are commingled out of good and evil: and Edward Hyde, alone in the ranks of mankind, was pure evil’

The story of respectable Dr Jekyll’s strange association with ‘damnable young man’ Edward Hyde; the hunt through fog-bound London for a killer; and the final revelation of Hyde’s true identity is a chilling exploration of humanity’s basest capacity for evil.

Why now?
Two reasons: 1) I DNFed my original choice for this month’s classics – Far From the Madding Crowd – because it was all sheep and fields and I didn’t care. 2) I’m really looking forward to the new ITV adaptation coming in October and had planned to read this before I watched it anyway.

The verdict:
I feel like the story of Dr Jekyll and Mr Hyde is one that I've never not known. It’s a classic, of course, but it's also very commonly referenced in pop culture, and so I didn’t really know what to expect from the original novella.

Being only 75 pages long, the story of Jekyll’s transformation into Hyde and his subsequent reign of terror was a little more succinct than I was expecting. There was only one murder that we actually experienced and the story isn’t actually told by Jekyll, but by his friend and lawyer, Mr Utterson. It’s more of a mystery than the horror I thought it was. From the beginning, we’re introduced to the idea of the monstrous Hyde and the mystery surrounding him and most of the story is actually Utterson and his and Jekyll’s friend, Lanyon, trying to figure out his connection to Jekyll.

The air of mystery set against the dark, grimy and foggy backdrop of Victorian London creates a wonderfully tense atmosphere and it was that feel of Dr Jekyll and Mr Hyde than I actually enjoyed the most. There’s something about people trudging around the dark backstreets of Victorian Soho that sets a certain tone – this was written only two years before the horrific crimes of Jack the Ripper across the city. It’s not until the final chapter that we find out the truth about how Hyde was unleashed on the world and it was so interesting to see how much the original has been expanded and developed over the years while still retaining the integrity of the original. I do think that knowing the story from all of the adaptations and general knowledge of the story lessened the impact of reading this novella, but I'm very glad I did it.

I really love the exploration of good and evil in humanity. It would be easy to get lost in the fantastical and the science in this story but it has a real human element to it. I like the idea that Hyde is born out of all of Jekyll’s basest instincts which has been warped with none of the other parts of you that provide morals, emotions or fear of consequences. What’s even more interesting to me is that Hyde’s presence doesn’t eliminate those things from Jekyll – it’s very clear how this presented an early understanding of split personality disorder. It's made me incredibly curious and I’ll definitely be reading up on it. Man, I wish I got to study this at school or university…

Robert Louis Stevenson’s prose is incredibly accessible while still retaining the mark of his time. It’s smart, snappy and engaging; I really do recommending picking it up, even if you’re merely curious to see what the has been changed from the original tale.

Still not convinced?
- There’s a new 10-part adaptation coming in October (written by Charlie Higson of The Enemy series fame) and it looks EXCELLENT. Here’s the trailer:

- This is a story that everyone knows, without even realising that they do, so it’s interesting to read the original source.
- Perfectly dark and gloomy for the when the nights are drawing in…