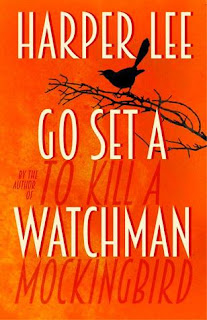 Synopsis
Maycomb, Alabama. Twenty-six-year old Jean Louise Finch – ‘Scout’ – returns home from New York City to visit her ageing father, Atticus. Set against the political backdrop of the civil rights tensions and political turmoil that were transforming the South, Jean Louise’s homecoming turns bittersweet when she learns disturbing truths about her close-knit family, the town and the people dearest to her. Memories from her childhood flood back, and her values and assumptions are thrown into doubt. Featuring many of the iconic characters from To Kill a Mockingbird, Go Set a Watchman perfectly captures a young woman, and a world, in painful yet necessary transition out of the illusions of the past – a journey that can be guided only be one’s own conscience.

Written in the mid-1950s, Go Set a Watchman imparts a fuller, richer understanding and appreciation of Harper Lee. Here is an unforgettable novel of wisdom, humanity, passion, humour and effortless precision – a profoundly affecting work of art that is both wonderfully evocative of another era and relevant to our own times. It not only confirms the brilliant of To Kill a Mockingbird, but also serves as its essential companion, adding depth, context and new meaning to a classic.

Review
Even though I wanted to read Go Set a Watchman as soon as it was announced, I knew it would be a while under I got around to reading it and so I decided to give the Audible trial a go and listen to it that way. I really enjoyed it!

The novel is narrated by Reese Witherspoon and her soft, Southern drawl was perfect – it brought Maycomb alive. Scout is now 26-year-old Jean Louise and she’s back home in Maycomb, Alabama for a two week visit, but it's not quite what she remembered. It was really affecting to see how the relationship between Cal and Jean Louise had deteriorated so severely and even worse to see Jean Louise suffer as her ideas of the people she grew up with crumbled around her. And yet I also think it’s a really important part of growing up that Lee is showing here. Jean Louise is seeing her childhood throw adult eyes and it's a bit of a shock. Admittedly, Atticus’s view are nasty and it’s not pleasant for those that have loved him since To Kill a Mockingbird, but realising that someone you idolise is a mere mortal is part of growing up.

I really enjoyed the story of an older Scout and even more glimpses into her childhood and teenage years, but mostly I liked Go Set a Watchman as a curiosity. Seeing an early draft of one of the most beloved novels is fascinating. I loved seeing what had changed, what stayed the same, how the messages altered and generally how such a masterpiece evolved into one. 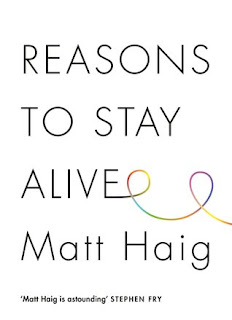 Synopsis
Aged 24, Matt Haig’s world caved in. he could see no way to go on living. This is the true story of how he came through crisis, triumphed over an illness that almost destroyed him and learned to live again.

A moving, funny and joyous exploration of how to live better, love better and feel more alive, Reasons to Stay Alive is more than a memoir. It is about making the most of your time on earth.

“I wrote this book because the oldest clichés remain the truest. Time heals. The bottom of the valley never provides the clearest view. The tunnel does have light at the end of it, even if we haven’t been able to see it… Words, just sometimes, really can set you free.”

Review
Matt Haig’s memoir is an easy to read book about a difficult subject that I think everyone, whether you’ve suffered from mental illness or not, needs to read.

Reasons to Stay Alive is a collection of short chapters, anecdotes, lists, facts and a really lovely chapter where Matt Haig’s Twitter followers donated their #reasonstostayalive. It makes the book educational and enlightening as well as an insight into Matt’s experiences which are a little intense to read about at times. Near the end there’s a chapter where Matt lays out 40 pieces of advice on ‘How to live’ and that was by far my favourite part of the book. Those are tidbits that everyone could benefit from and personally, I found a particular few that I could really benefit from keeping in mind. In fact, there are a lot of quotes from Reasons to Stay Alive that I’d like to stick up all over my walls.

This is a really important piece of writing. For those who have suffered, for those who have bene close to others suffering and everyone else. I really hope that this makes it into the right hands – it could be invaluable to those wondering if you can ever come out of the other side. 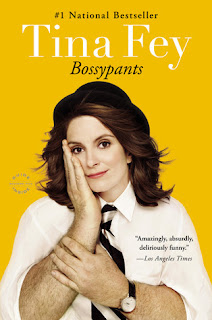 Synopsis
Once in a generation a woman comes along who changes everything. Tina Fey is not that woman, but she met that woman once and acted weird around her.

Before 30 Rock, Mean Girl and ‘Sarah Palin’, Tina Fey was just a young girl with a dream: a recurring stress dream that she was being chased through a local airport by her middle-school gym teacher.

She also had a dream that one day she would be a comedian on TV. She has seen both these dreams come true.

At last, Tina Fey’s story can be told. From her youthful days as a vicious nerd to her tour of duty on Saturday Night Live; from her passionately heartfelt pursuit of physical beauty to her life as a mother eating things off the floor; from her one-sided college romance to her nearly fatal honeymoon – from the beginning of this paragraph to tis final sentence.

Tina Fey reveals all, and proves what we’ve all suspected: you’re no one until someone calls you bossy.

Review
I didn’t know much at all about Tina Fey until Bossypants but it was an amusing an interesting look at being a woman in TV comedy, writing and anecdotes about the famous moments in her career.

Fey talks about her life as a whole, weaving in stories, observations and discussions along the way. She discusses motherhood, body image, the media, sexism, beauty standards and her work with Saturday Night Live and 30 Rock. I have to admit that I was hoping for a little more about Mean Girls – it was only mentioned offhandedly a few times, sadly. I would love to have heard about writing and filming it, as well as maybe comments on its success and cult status.

I listened to Bossypants on audio and it was read by Fey. Her dry, witty and conversational narration was the perfect way to experience it and I highly recommending giving it a listen – it’s nice and short too!

I thoroughly enjoyed Bossypants and fell in love with Tina Fey along the way. Now if you’ll excuse me, I have 7 seasons of 30 Rock to watch.