All About Pumpkin, Natasha Farrant 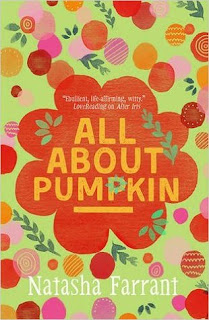 Other Titles by this Author: Things We Did For Love; The Diaries of Bluebell Gadsby: After Iris, Flora in Love

It’s hard being the normal one in such a crazy family.

Bluebell, Twig and Jas have been sent to stay with Grandma for the summer. The countryside is how Bluebell remembers it – full of fun and adventure. But this year, it feels different somehow.

There is sobbing and shouting. There are cantering horses and night-time dares. Confusing boys and grandmas to look after. But there is also laughter and more than this, there is love – and that’s what being a family is all about.

The first two books in this series are full of heart, warmth and life and All About Punpkin was no exception.

It’s the start of the summer, Pumpkin is now four months old, Dad’s in New Zealand filming with Flora and Twig, Blue and Jas have been shipped off to Grandma’s in Devon to give mum some peace and quiet. Even though Blue, Twig and Jas are initially a little reluctant about the summer ahead of them, but it doesn’t take them long to fall back in love with Horsehill. I fell in love with Horsehill! All About Pumpkin is drenched in the hazy heat of summer and it's gorgeous.

But as always with the Gadsbys, there’s a lot more under the surface than a summer of swimming in the stream, riding the ponies in the paddock and helping Grandma with the vegetable garden. Pumpkin’s arrival has thrown Blue into turmoil a little. She fears that Pumpkin is an attempt to replace Iris (her twin sister who died) and although she understand logically that that’s not possible and probably not the case, she can’t help the way it feels for her or the disconnect with and disinterest she has in Pumpkin. I know it sounds a little silly, but I’m so glad Blue’s grief was still a motivating factor in Blue. It can often get lost in series’ where it’s a large part of the story in the first book but then drifts off and though grief does lesson, it doesn’t leave (as far as I’ve experienced anyway) and I’m really glad Farrant presented that.

As well as coming to terms with Pumpkin, the Gadsby children are also facing the sadness of their Grandma getting older and things not being how they used to be at Horsehill because they’re getting older too. It kept hitting me how much more grown up Blue seemed in All About Pumpkin. I loved the balance of her growing up and the comebacks, thought processes and arguments of a 14-year-old girl; I thought it was done brilliantly. She’s straddling that age of leaving childhood fully behind her and becoming a teenager in all its bittersweet glory.

Lots of the newfound changes in Blue appeared along with her Grandma’s new neighbours, Lizzie, her son Skye and his cousin Ollie. Ollie is beautiful and confident and makes Blue blush a little while Skye is messy and shy and all about horses. Blue was thrown into the horror of liking someone when you didn’t want to and the competition that caused between the boys. Her interactions with them over the summer taught Blue a fair few lessons and I love the strength of character she showed at the end as a result. I also loved Skye as a character. It’s so important that there are kids and teens in books that aren’t good at school and academics, but that doesn’t means they don’t have talents or valuable skills – that’s something that isn’t really appreciated in any form of media and it should be.

All About Pumkin is another delightfully heartwarming, thoughtful and engaging instalment in The Diaries of Bluebell Gadsby. My love for the Gadsby family grows with each book and I would happily read about them forever.

Thanks to Faber for the review copy.