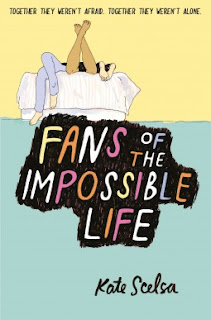 “May we live impossibly,” Sebby said when he opened his eyes. “Against all odds. Many people look at us and wonder how such jewels can sparkle in the sad desert of the world. May we live the impossible life.”

Mira is trying to pretend that she's a fully functioning human – rather than a girl who can't get out of bed for days on end.

Jeremy is a painfully shy art nerd in self-imposed isolation after an incident that ruined his last year of school.

And Sebby is the charming gay foster kid who seems to carry sunlight around with him.

For Jeremy, it’s as if he has always been expecting Sebby, though they’ve only just met.

For Mira, she finally feels awake when she's with him.

But Sebby has his own secrets, and it’s only together that the three of them can fix their broken selves – and live their impossible lives…

The synopsis of this book is a little misleading in ways. It suggests a bisexual love triangle and instead there’s a very heightened, intimate and dependent friendship, with kissing. I was expecting Sebby, Jeremy and Mira finding each other and falling in love with each other to be full of emotion, and it was in some ways, but it felt like it was mostly them trying to escape emotion. They didn’t want to feel the things they did, live their lives as they were or accept the reality of their experiences. A lot of this was down to the mental health issues the characters suffered from, the backlash from exploring their sexuality and home situations in Sebby and Mira’s cases.

There’s no doubt that Sebby, Mira and Jeremy are interesting characters and I enjoyed hearing from all three in the split narration, but I just didn’t connect with them. They felt a little flat and two-dimensional. I did still want to know what happened to them, however, and I was really hoping that they'd get as happy an ending they could, and I think they did. It was bittersweet and had a sense of inevitability to it which I really liked. I was a little worried it would be underwhelming. It’s still an unusual ending for a YA contemporary, but that’s what I liked about it – it had grit and realism to it.

Though I have mixed feelings about Kate Scelsa’s debut, I’m definitely interested in seeing what she delivers next.