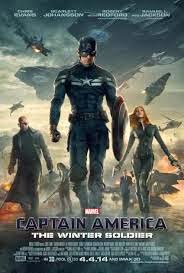 When S.H.I.E.L.D. is attacked, Captain America becomes embroiled in a web of intrigue that threatens the future of mankind. As the conspiracy deepens and trust is destroyed, Cap, Black Widow and the Falcon must join forces to battle their insidious enemy’s most mysterious and powerful weapon yet – the Winter Soldier.

Of all of the Avengers Captain America is by far my favourite. I love his tragic origin story, how different it is to most of the others and the huge life he had before the Avengers. With all of this it was no surprise that I loved The First Avenger and I was incredibly excited to see Cap adapt to modern America and working with S.H.I.E.L.D. and though The Winter Soldier was very, very different to the first film, I absolutely loved it.

The Winter Soldier is very linked to The First Avenger and Avengers Assemble. Both films and the effects of the events that took place during, as well as the other Avengers, are referenced often, but in a natural and subtle way that makes this influx of Marvel movies feel like a complete universe with all of the movies interlinking. I especially loved how Cap’s love for Peggy from over 80 years ago was still strong in his mind. Ugh, my heart.

But we got something new and thoroughly excellent in this film: the friendship between Cap and Natasha. The banter was top notch, the teasing on point and their connection was just perfect. I loved that there was no intention of a romantic relationship between them; if anything, Natasha was desperate to fix Cap up! Natasha really does deserve her own movie. The Black Widow has more than enough of an origin story, personality, mystery and potential for trouble to hold her own – come on Marvel!

It’s a good job Cap and Natasha can trust each other as S.H.I.E.L.D. has been compromised and we don’t know who to trust. Nick, Cap and Natasha face old enemies and new, joined together to destroy S.H.I.E.L.D. and it’s edge of your seat stuff. I couldn’t stop watching.

The Winter Soldier was left nicely open for either the next Avengers or another movie focusing on Cap – I’m hoping for both, personally.