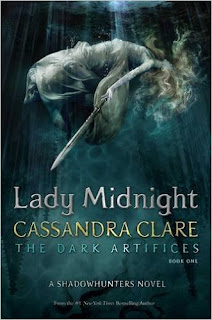 In a secret world where half-angel warriors called Shadowhunters are sworn to fight demons, parabatai is a sacred word. A parabatai is your best friend and battle partner. Parabatai can be everything to each other – but they can never fall in love. Emma Carstairs is a Shadowhunter, the best in her generation. Together with her parabatai, Julian Blackthorn, she patrols the streets of Los Angeles, where faeries – the most powerful of supernatural creatures – teeter on the edge of open war with Shadowhunters. When bodies – both faeries and human – turn up, bearing marks that match those found on Emma’s own murdered parents, an uneasy alliance is formed. This is Emma’s chance at revenge – and Julian’s chance to get back his brother, a prisoner of the faerie Courts. All they have to do is solve the murders within two weeks…and before the murderer targets them.

As you can imagine, I nearly died of happiness when an early proof of Lady Midnight arrived and I thoroughly, thoroughly enjoyed it.

We picked up with the world of the Shadowhunters five years after the ending of City of Heavenly Fire, and the battle to defeat Sebastian is now referred to as the Dark War, and a Cold Peace has been struck between the Shadowhunters and the fae. The world has moved on a lot from where we left it and it was so good to find out what Jace, Clary, Simon, Magnus, Alec, Jem and Tessa are up to now – and to see them appear again! It was so lovely. I did find that I spent at least the first half of Lady Midnight more invested in finding out about the old gang and desperately waiting for them to be mentioned and make appearances. But I eventually fell in love with Emma, Jules and the rest of the Blackthorns though.

There’s a whole new cast of characters to meet – we’ve got another big family to fall in love with! I really liked the dynamics between the Blackthorns and the way that the romance developed between Jules and Emma; it wasn’t new, it has always been there in the background but never fully embraced until now. It seemed to escalate a bit quicker when it finally happened (420 flipping pages!!) than it has in either of the previous series’ and it was actually really refreshing. It felt very natural for their history. I have to admit that Emma and Jules seemed pretty much like flipped versions of Jace and Clary, though.

One of Cassandra Clare’s strengths is her ability to torture both her characters and her readers with an agonising forbidden romance and The Dark Artifices is going to be no different! I really loved how the whole ‘falling in love with your parabatai is forbidden’ complication was revealed and played out. It’s going to make for some very, very interesting reading, and I’ve already had my heart a little broken… All I'm going to say is poor, poor Jules. I fell a bit in love with Jules, to be honest. He’s not Will or Jace Herondale level yet (yet) but he has serious potential. I think he has one of biggest and most in depth backstories of Clare’s characters so far and I felt like I knew him very early on.

I don’t want to go into the plot or anything, especially as the book was on embargo until yesterday! But I loved that it was a bit of a murder mystery as well as Emma’s search for answers, multiple love stories and the grappling with the politics of the Shadowhunter world, and once again, the oppressive power of the Clave. I do find this world endlessly interesting, especially as we go back and forwards through time and to different locations, and I'm looking forward to seeing where Clare will take it in the rest of the trilogy.

In the back of Lady Midnight is a short story featuring the old gang, running parallel to a moment in Lady Midnight and I’ve got to say, it through up quite a few questions, but also some serious squeeing happy moments. I really hope that we get one of these after each book to catch us up with what Cassandra Clare is tormenting us with here.

Thanks to S&S and Georgia Lawe PR for the review copy.