The Love That Split the World, Emily Henry 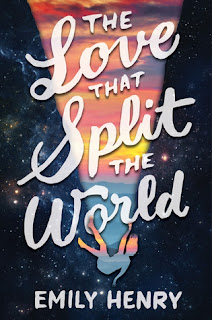 Natalie’s last summer in her small Kentucky hometown is off to a magical start…until she starts seeing the “wrong things”. They're just momentary glimpses at first – her front door is red instead of its usual green, there’s a pre-school where the garden store should be. But then her whole town disappears for hours, fading away into rolling hills and grazing buffalo, and Nat knows something isn’t right.

That’s when she gets a visit from the kind but mysterious apparition she calls “Grandmother”, who tells her: “You have three months to save him.” The next night, under the stadium lights of the high school football field, she meets a beautiful boy named Beau, and it’s as if time just stops and nothing exists. Nothing, except Natalie and Beau.

There’s no point denying it, it was the cover that drew me to The Love That Split the World (come on, LOOK at the typography!), but after reading an excerpt of the first chapter, I had to have it.

I'm happy to report that the inside is just as beautiful as the outside. Emily Henry’s writing is lyrical and intense, perfectly capturing Natalie’s dizzying summer of love and time slips. I’d never say that I'm a fan of time-slip/time-travel novels, but this is the second one I've read and loved recently (the other is The Square Root of Summer by Harriet Reuter-Hapgood). I love the uncertainty, the fuzzed perceptions and loss of time – there’s something heady about it that effortlessly evokes boiling hot summers that feel on the precipice of change. And life is definitely going to change for Natalie.

Natalie isn’t wholly normal, even before time starts to slip and she begins seeing a world that isn’t her own. Ever since she was a little girl, she's been visited by Grandmother, or God, as she sometimes wonders. Grandmother has spent her visits telling her wonderful stories from Native American cultures and mythology and promising that one day, they’ll mean something to her. I loved Grandmother’s stories – they were magical and the significance they would eventually have upon Natalie during the summer was very clever. Every story tied in with Natalie’s confused identity and dissonance with her family and her life as an adopted child and having a Native American birth mother. It’s a very complicated area and I'm a little weary of even saying anything related to it because I don’t know anything about the issues, but I did think that Natalie’s heritage was handled carefully and sensitively, and yet I also wanted a little more from it as it sometimes just felt like a plot device.

The same can be said for the slight instalove between Natalie and Beau, but it didn’t take me long to become completely swept up by their whirlwind romance and I didn’t care anymore! I was desperate for them to keep finding their way back to each other as the clock counted down. It created the most delicious, heady, whirlwind of a romance and it was gorgeous to read about. As they learned more and more about each other, they were also trying to find Grandmother and get her to explain what was going on and what they needed to do. When the answers came right at the end, it did hurt my brain a little bit and I had to re-read the explanation, but it was a very clever resolution and I was super happy with the ending. I even got a little teary!

The Love That Split the World is a gorgeous novel about dizzying love, time travel, alternate worlds, and figuring out who you truly are. I’m so looking forward to seeing what Emily Henry cooks up next.