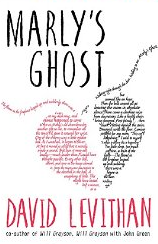 Other Titles by thus Author: Boy Meets Boy, The Realm of Possibility, Are We There Yet?, Nick & Norah’s Infinite Playlist (withRachel Cohn), Wide Awake, Naomi & Eli’s No-Kiss List (with Rachel Cohn), Love is the Higher Law, Will Grayson, Will Grayson (with John Green), The Lover’s Dictionary, Dash & Lily’s Book of Dares (with Rachel Cohn), Invisibility (with Andrea Cremer), Every Day, How They Met and Other Stories, Two Boys Kissing

When Ben’s girlfriend, Marly, dies, he feels his life is over and the prospect of Valentine’s Day without her fills him with bitterness. But then Marly arrives – or at least, her ghost does – along with three other spirits. Now Ben must take a journey through valentines past, present, and future – and what he learns will change him forever.

A remix of Charles Dickens’ A Christmas Carol with a Valentines twist and the Levithan magic.

I’ve mentioned before that I find David Levithan’s earlier stuff to be lacking what I fell in love with from his novels and Marly’s Ghost gave me that feeling too.

This is a very short novel. I read it in about two hours on a Sunday morning while still in bed. I’m not a huge Dickens fan but I love the idea behind A Christmas Carol so I was looking forward to seeing what Levithan would do to it. I liked the Valentine’s twist and the loss of someone forcing bitterness on the holiday – BBBBbkasjcbnsoldcnbBBen’s grief and need to lock down his heart and mind felt authentic.

In Levithan’s author’s note he tells the reader a little bit about how Marly’s Ghost came about and talks about how it is a remix novel. He said that he lifted a fair few lines straight from the original text and worked it over and over with his own story until it was a mixture of the two and this really clarified something for me. I kept feeling that there were certain phrases that were uncharacteristically cluncky or formal and completely out of place – it was Dickens!

Marly’s Ghost is a quick, easy read, but I’m actually more interested in the method of the novel rather than the story! Come on Levithan, I want to fall back in love with your books!

Thanks to Electric Monkey for the review copy.