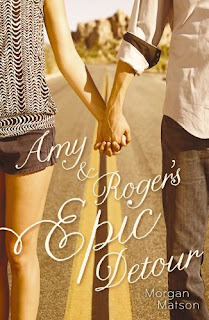 When you’re on a road trip, life is all about the detours…

Amy Curry is having a terrible year. Her mother has decided to move cross country and needs Amy to get their car from California to Connecticut. There’s just one small problem: since her dad died this past spring, Amy hasn’t been able to get behind the wheel. Enter Roger, the nineteen-year-old son of an old family friend, who turns out to be unexpectedly cute…and dealing with some baggage of his own.

Meeting new people and coming to terms with her father’s death were not what Amy had planned on this trip. And travelling the Loneliest Road in America, seeing the Colorado mountains, crossing the Kansas plains, and visiting diners, dingy motels, and Graceland were definitely not on the itinerary. But as they drive, Amy learns that the people you least expected are the ones you may need the most - and that sometimes you have to get lost to find your way home.

Amy and Roger’s Epic Detour is a perfect read for summer that will touch even the hardest of hearts.

Throughout the novel, mementos of Amy and Roger’s trip across America are woven into the narrative. Receipts and menus from their diner stops, random photos from the road, play lists and even pages from books really add to the novel and set it apart a little. I really love when this sense of realness is introduced to the story and characters by extra little titbits.

All of the extras didn’t draw the novel away from the real essence of the novel - Amy and Roger working through their issues on the road trip - at all. Instead they connected them and allowed Amy to come to terms with her dad’s death and it’s repercussions on her family and Roger to resolve his girl problems. And of course they fell for each other, too. I would’ve been really annoyed if they hadn’t!

Morgan Matson titled her debut so perfectly. Amy and Roger’s road trip went off track immediately and on their travels they met some very cool people: Barb who gave them some very important advice, Drew who introduced Amy and Roger to heaven in burger form and Blonweyn who gave Amy her confidence back in a rather unusual way, among others. Every one of them helped Amy and Roger in solving their issues in one way or another.

Amy and Roger’s Epic Detour left me dying to go on a road trip across the US and eager to see what the very talented Morgan Matson has in store for us next.

Sophie
Posted by So Many Books, So Little Time at 00:01
Email ThisBlogThis!Share to TwitterShare to FacebookShare to Pinterest