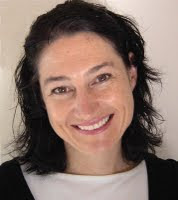 Amanda Ashby was born in Australia and now lives in New Zealand with her husband and two children. Her debut, You Had Me At Halo, has been nominated for the Romantic Times Reviewers’ Choice award. Zombie Queen of Newbery High is her first novel for young adults.
1. Is there a specific time or place that you do your best writing in?
I like to think it's in the morning after I've dropped the kids to school but unfortunately I'm such a procrastinator and get so easily distracted by things on the Internet that I end up trying to get my entire word count down in the afternoon before I pick them up, or worse, last thing at night when I really should be in bed!

2. Who were your favourite authors as a teenager? Are they different to your current favourites?
I grew up in the eighties so it was all about Judith Krantz, Joan Collins and Virginia Andrews, and my friends and I use to all buy one each and then pass them around. I definitely don't read those sort of books anymore, however some authors that I did first read as a teenager and I still love today are Jane Austen and Georgette Heyer. I also loved the Trixie Beldon books.
3. If you were only allowed to take three books to a desert island, what would they be? 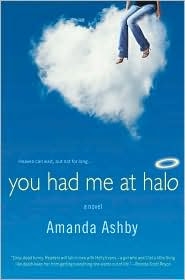 Oh this is such a hard game to play. I do re-read some books (like Jane Austen and Georgette Heyer) but on the whole I prefer new books so I'd have to say the next Janet Evanovich, the next Suzanne Collins and the next Raymond E Feist book (pretty please!!!).
4. Where did you get the idea for Zombie Queen of Newbery High from?
I used to joke around that I was going to write a zombie book but the more I thought about it, the more I decided that I really wanted to do it so I sat down one night with my zombie loving husband and we brainstormed it. However, we weren't getting anywhere so we decided to think of titles first. Anyway, I started humming that song - Witch Queen of New Orleans and that's where my title came from. Then, because I like to do everything backwards, I started wondering how on earth a person would become a zombie queen and from there we got the plot (and let me add that this is only the second time my husband has ever volunteered to brainstorm with me, the other time was when I wanted to write a book about blowing up the world!)
5. Do you have an irritating little sister like Grace?
Hahaha - no I don't, but that's a great question. I actually have no idea where Grace came from but she was so over the top that she made me laugh (and if I laugh at a character they have less chance of getting the chop!!!!) 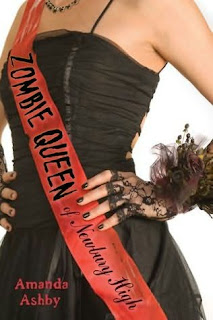 6. Are any of your characters based on real people?
None of my characters are based on anyone I know (mores the pity because I would love to hang out with some of them!). However, I do think that my main characters often have fragments of me in there. It's not something that I ever do consciously, but issues and interests do tend to have a nasty habit of rising to the surface no matter how hard you try to ignore them!
7. Why zombies?
Honestly, there is something so inherently funny about the word zombie. Plus, with all the crazy walking and the drool, I just found them irresistible!!!!
8. Are you working on anything at the moment? Can you tell us anything about it?
My next book for Puffin is tentatively titled Fairy Bad Day and is about a teenage girl who wants to be a dragon slayer like her mom, but ends up getting stuck with fairies instead. I've also just sold a mid-grade series about an eleven year old girl who gets turned into a djinn (genie) the day before she is due to start sixth grade!

Thank you very much, Amanda! You can visit Amanda at her website here and read my review of Zombie Queen of Newbery High here.
Sophie
Posted by So Many Books, So Little Time at 17:32
Email ThisBlogThis!Share to TwitterShare to FacebookShare to Pinterest