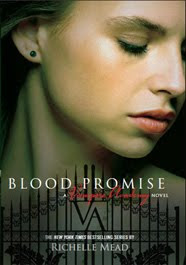 Blood Promise: A Vampire Academy Novel - Richelle Mead
Pages: 503
Publisher: Sleuth Razorbill
Release Date: 25th August 2009
Other Titles in the Series: Vampire Academy (my review), Frostbite (my review), Shadow Kiss (my review)
!SPOILER ALERT! DO NOT READ THIS SUMMARY IF YOU HAVEN’T READ THE PREVIOUS THREE IN THE SERIES BUT INTEND TO.
Bound by love, but sworn to kill…
The world thought Dimitri was dead. And to a certain extent, he was. But I hadn’t been able to forget a conversation he and I had once had. We’d both agreed that we’d rather be dead - truly dead - than walk the world as Strigoi. It was time to honour our words.
Guardian Rose Hathaway’s life will ever be the same. The recent attack on St. Vladimir’s Academy devastated the entire Moroi world. And, for the few victims carried off by Strigoi, their fates are even worse. A rare tattoo now adorns Rose’s neck; a mark that says she’s killed far too many Strigoi to count.
But only one victim matters…Dimitri Belikov. Rose must now choose one of two very different paths: honouring her life’s vow to protect Lissa - her best friend and the last surviving Dragomir princess - or, dropping out of the Academy to strike out on her own and hunt down the man she loves. She’ll have to go to the ends of the earth to find Dimitri and keep the promise he begged her to make. But the question is, when the time comes, will he want to be saved?
Now, with everything at stake - and worlds away from St. Vladimir’s Academy and her unguarded, vulnerable, and newly rebellious best friend - can Rose find the strength to destroy Dimitri? Or, will she sacrifice herself for a chance at eternal love?
Readers who fell in love with Rose, Lissa, and Dimitri won’t want to miss Blood Promise, the much-anticipated, epic fourth novel in Richelle Mead’s enthralling Vampire Academy series.
It feels like I waited forever to read Blood Promise and there were lots of things that I really wanted to happen in it. But I never could have anticipated what actually did happen.
There is always more to learn about in the world of Vampire Academy. The lore and dimensions of Rose’s world are constantly growing and developing. And like every teenager, Rose learns new things and her ideals change as she changes and experiences the world. You can’t take your eye of the ball for a second when reading Blood Promise and you won’t even be able to draw breath, let alone get bored!
Dimitri as a Strigoi is definitely different. I don’t want to say too much about it because I don’t want to spoil it, but be prepared for a very different man. I had to go back and read my favourite bits from the previous three books to make myself feel better!
But it was Rose’s memories of her and Dimitri that I really loved. Tiny snippets of their lives that we don’t see in any of the books are a lovely contrast to the relentless action and emotional torment of Blood Promise. They also helped to emphasise just how much Rose changed in the book.
With all the plot set-ups for Spirit Bound, I can’t wait to see how they play out. Though there are a few things that I definitely want to happen! But April is a long way away!
Sophie
Posted by So Many Books, So Little Time at 12:09
Email ThisBlogThis!Share to TwitterShare to FacebookShare to Pinterest