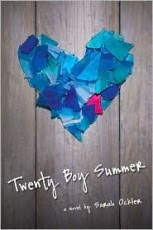 Twenty Boy Summer - Sarah Ockler
Pages: 290
Publisher: Little, Brown
Release Date: 6th August 2009
“Don’t worry, Anna, I’ll tell her okay? Just let me think about the best way to do it.”
“Okay.”
“Promise me? Promise you won’t say anything?”
“Don’t worry.” I laughed. “It’s our secret, right?”
According to Anna’s best friend, Frankie, twenty days in Zanzibar Bay is the perfect opportunity to have a summer fling, and if they meet one boy every day, there a pretty good chance Anna will find her first summer romance. Anna light-heartedly agrees to the game, but there’s something she hasn’t told Frankie - she’s already had her romance, and it was with Frankie’s older brother, Matt, just before his tragic death one year ago.
Beautifully written and emotionally honest, this is a debut novel that explores what it means to truly love someone, what it means to grieve, and ultimately, how to make the most of every single moment this world has to offer.
Twenty Boy Summer is a beautiful story of love, loss and friendship that I loved. Sarah Ockler has written a stunning debut.
I thought that the way that the cover tied in with the story was very clever. Sea glass is something that is very important in Twenty Boy Summer as it’s something that Anna associates with Matt and his summers in Zanzibar Bay. This was reflected in the blue and green sea glass heart holding a single piece of rare red sea glass on the cover. I think that it’s quite rare for a cover to mirror the story and the characters to such an extent.
Even though Twenty Boy Summer deals with grief, it’s not a depressing story at all. There are sad moments, especially in Anna’s journal entries to Matt and how she thinks of him, that actually made me cry at some points. But there were very funny moments scattered throughout the novel too, usually when Frankie was involved. She had madcap ideas and funny lines, but it was the way that Frankie spoke that really cracked me up. She kept trying to use complex words and mixed them up and put them in completely the wrong place. It found it pretty funny!
The way that Sarah Ockler let us get to know Matt was subtle and very well done. We saw postcards sent to Anna and flashbacks and memories from their time together. From those things we learnt of Matt’s love of words and books, his love of the sea and his protective nature, especially where his sister was concerned. Sarah Ockler allowed us to see exactly why Anna fell in love with him.
Twenty Boy Summer is a heartbreakingly beautiful debut and I’m really looking forward to reading whatever Sarah Ockler writes next.
Sophie
Posted by So Many Books, So Little Time at 18:53
Email ThisBlogThis!Share to TwitterShare to FacebookShare to Pinterest