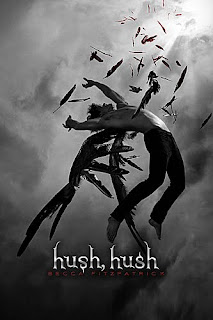 Hush, Hush - Becca Fitzpatrick
Pages: 391
Publisher: Simon and Schuster
Release Date: 29th October 2009
Other Titles in the Series: Crescendo (2010)
For Nora Grey, romance was not part of the plan. She’s never been particularly attracted to the boys at her school, no matter how much her best friend, Vee, pushes them at her. Not until Patch came along. With his easy smile and eyes that seem to see inside her, Nora is drawn to him against her better judgement.
But after a series of terrifying encounters, Nora’s not sure who to trust. Patch seems to be everywhere she is and to know more about her than her own mother. She can’t decide whether she should fall into his arms or run and hide. And when she tries to seek some answers, she finds herself near a truth that is way more unsettling than anything Patch makes her feel.
For Nora is right in the middle of a centuries-old battle between the immortal and those that have fallen - and sooner or later, she’s going to have to pick sides…
Hush, Hush is just as amazing as everybody has been saying it is. I completely and utterly loved it.
Becca Fitzpatrick is a fantastic new addition to the YA fantasy world. Her writing is dark, atmospheric and absolutely addictive. The world that she creates is creepy and mysterious, which is only intensified by the winding country lanes of Maine shrouded in fog that the story is set. Becca Fitzpatrick is going to be a huge talent in the world of young adult fiction.
The story is laced with mystery and danger. There are surprises on nearly every page and I never knew where the story was going to take me next. I couldn’t stop reading. By half way through Hush, Hush I kept on telling myself that I could read just one more chapter, but I ended up finishing it. It was completely compulsive.
But it was the characters that made Hush, Hush so phenomenal. Nora is a brilliant heroine; she’s a fantastic mixture of teenage girls everywhere. She’s hard not to like and care for really. Nora’s best friend, Vee, is brilliant. She’s incredibly funny, adventurous and impulsive; an excellent compliment to Nora. But what to say about Patch. He’s cheeky, unnerving and extremely difficult to ignore. Everything he knew about Nora and everything he said just made him more complicated and even harder to decipher. Nora had no chance but to fall for him!
I adored Hush, Hush and I can’t wait to find out what Nora and Patch get up to in the sequel, Crescendo.
Sophie
Posted by So Many Books, So Little Time at 10:06
Email ThisBlogThis!Share to TwitterShare to FacebookShare to Pinterest