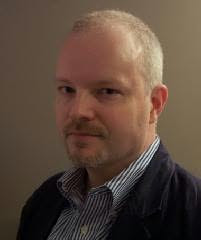 Daniel Waters is the author of the fabulous Generation Dead. The sequel Kiss of Life was released earlier this year. He lives in Connecticut with his wife and children.
1. Is there a specific time or place that you do your best writing in?
Nope. Anywhere, anywhen.
2. Who were your favourite authors as a teenager? Are they different toyour current favourites?
I read mostly science fiction and horror when I was a teenager, some of my favorites were Stephen King, Peter Straub, Robert Heinlein, Samuel Delaney, Robert Howard, Michael Moorcock. I also loved Ian Fleming and Raymond Chandler. They are all still favorites, but I discover new ones every day. 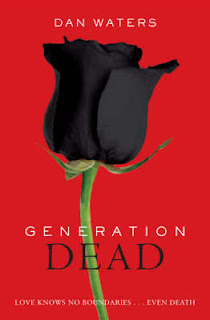 3. If you were only allowed to take three books to a desert island, what would they be? Just three?
The complete works of Shakespeare, the Bible, and, um...can I take the complete run of Mad Magazine? It is available on CD-Rom.
4. Was it hard writing as a zombie for Adam’s chapters in Kiss of Life?
It was fun!
5. Both the US and UK covers for your books are pretty awesome. Did you have any input into them?
Disney/Hyperion has been kind enough to run their concepts by me, and I have to confess when they first told me the concept for GD I really didn't care for it. But then they sent me the jpeg and I thought it was the most beautiful cover I'd ever seen in my life, so my new policy is to shut up and let the experts do their jobs.
I've had no input on the UK covers at all, but I love them! 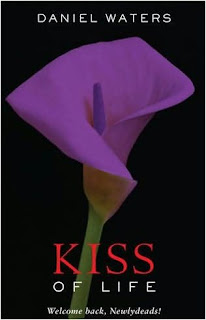 6. Where did the idea of Tommy’s blog come from?
Tommy blogs within Generation Dead, and as there was a lot of material I wanted to write that didn't really fit in the novels I thought it would fun for the readers (and me!) if I had a place where they could interact with the Generation Dead world.
7. How many books will there be in the Generation Dead series?
I'm not certain. I thought four initially but then I wanted to write another story so now I'm thinking five. And I'd like to do a book of short stories, too.
8. Are you working on anything at the moment? Can you tell us anything about it?
I'm working on the third Generation Dead book, Passing Strange, with my editor, and I have a couple other YA novels outside of the Generation Dead world that I'm working on.
Thanks very much, Dan! You can visit Dan at his website here and you can read my review of Kiss of Life here.
Sophie
Posted by So Many Books, So Little Time at 10:08
Email ThisBlogThis!Share to TwitterShare to FacebookShare to Pinterest