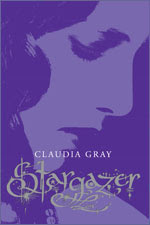 Stargazer - Claudia Gray
Pages: 326
Publisher: Harper Teen
Release Date: April 2009
Other Titles in this Series: Evernight (my review)
!SPOILER ALERT! If you haven’t read Evernight yet but plan to, you might not want to read any further because even the synopsis gives away major plot points of Evernight.
The vampire in me was closer to the surface…
Evernight Academy: an exclusive boarding school for the most beautiful, dangerous students of all - vampires. Bianca, born to two vampires, has always been told her destiny is to become one of them.
But Bianca fell in love with Lucas - a vampire hunter sworn to destroy her kind. They were torn apart when his true identity was revealed, forcing him to flee the school.
Although they may be separated, Bianca and Lucas will not give each other up. She will risk anything to see him again, even if it means coming face-to-face with the vampire hunters of Black Cross - or deceiving the powerful vampires of Evernight. Bianca’s secrets will force her to live a life of lies.
Yet Bianca isn’t the only one keeping secrets. When Evernight is attacked by an evil force that seems to target her, she discovers the truth she thought she knew is only the beginning…
Stargazer was really amazing. I loved is so much; maybe even more than I did Evernight. Pure fabulousness!
Claudia Gray really knows how to construct a plot. There were constant hints and ambiguities that made you wonder until it all suddenly fell into place with a bang. She keeps you gripped and guessing all the way with her beautiful, sensuous writing. Stargazer didn’t let me out of it’s pages until the very last sentence, and even then I was left wanting more.
The twists and turns of Stargazer kept on surprising me. Nearly all of them were completely unexpected and all of them took the story in a different direction like they did in Evernight. They also often changed the dynamics and my opinions of the characters.
Speaking of the characters. They were part of what made Stargazer so good. All of the supporting characters were developed more thoroughly and I learnt things about them that helped to explain why they are how they are. Racquel is one of my favourite characters and all of the horrible things that she faced and her reactions to them and the discoveries she made made me see her very differently - brave and strong. My opinion of Balthazar also changed. he went from being just a sweet guy who would do anything for those he cares about to a very old and lonely vampire hiding a very big secret. But Ranulf. He just made me laugh. His stiff old-fashioned comments contrasted brilliantly with Vic’s laid-back remarks.
I loved this book and I can’t wait for the next book in this amazing series. Go and read these books if you haven't. You don’t know what you’re missing!
Sophie
Posted by So Many Books, So Little Time at 11:24
Email ThisBlogThis!Share to TwitterShare to FacebookShare to Pinterest