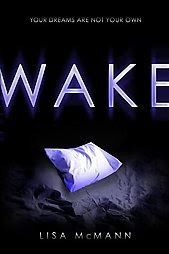 Wake - Lisa McMann
Pages: 210
Publisher: Simon Pulse
Release Date: 23rd December 2008
Other Titles in the Series: Fade, Gone
Not all dreams are sweet.
For seventeen-year-old Janie, getting sucked into other people’s dreams is getting old. Especially the falling dreams, and the sex-crazed dreams. Janie’s seen enough fantasy booty to last her a lifetime.
She can’t tell anybody about what she does - they’d never believe her, or worse, they’d think she was a freak. So Janie lives on the fringe, cursed with an ability she doesn’t want and can’t control.

Then she falls into a gruesome nightmare, one that chills her to the bone. For the first time, Janie is more than a witness to someone else’s twisted psyche. She is a participant…
I was a little bit disappointed in Wake. The raving reviews I’ve read from other bloggers set my expectations very high and it didn’t quite meet them for me.
Despite this, I was sucked into Janie’s story just like she is pulled into the dreams of other people. Her determination to make the best of her gift, or curse, along with the strength it must take to hide it, is admirable. I also liked how hard Janie worked at school and at her job so that she could go to college. She made me feel kind of lazy actually!
Cabel surprised me. He completely changed from how he was at the beginning of the book in both personality and appearance. Cabel’s reputation didn’t seem to affect him, even though it changed what everybody else thought about him. Even Janie. But I soon realised what a sweet guy he is and how perfect he is for Janie, as well as being a generally nice guy. What he was willing to sacrifice for Janie just reinforced this.
I enjoyed Wake and I’m looking forward to seeing what happens with Janie and Cabel in Fade.
Sophie
Posted by So Many Books, So Little Time at 19:25
Email ThisBlogThis!Share to TwitterShare to FacebookShare to Pinterest