Selina Penaluna - Jan Page
Dropped as a baby into a deep pool on the Cornish shore, Selina Penaluna emerges a different child - a mermaid changeling - and is forever drawn to the sea. Abandoned by her mother, neglected and abused by her father, she desperately wants to escape her lonely life.
Ellen and Jack are twins, evacuated from East London to Cornwall at the start of the war. The family that takes them in are well-off and a little stuffy. Ellen relishes this opportunity to better herself, but Jack finds his new life stifling and seeks freedom in the arms of Selina, the mysterious fisherman’s daughter whose wild beauty turns every man’s head.
Selina’s siren song has Jack captivated - but leaves his sister cold with jealousy. Can the young lovers find solace and build a new life together? And how will Ellen deal with being left behind?
A spellbinding novel full of passion and tragedy, that will enchant older readers.
Thanks to Georgia from Random House for sending me this. You can see my review here.

The Agency: A Spy in the House - Y.S. Lee
Mary Quinn leads a remarkable life.
At twelve, an orphan and convicted thief, she was miraculously rescued from the gallows. Now, at seventeen, she has a new and astonishing chance: to work uncover for the Agency.
It is May 1858, and a foul-smelling heat wave paralyzes London. Mary enters a rich merchants household to solve the mystery of his lost cargo ships. But as she soon learns, the house is full of deceptions, and people are not what they seem - including Mary herself.
The first books in a riveting new Victorian detective trilogy.
Thanks to Ying Lee for sending me a copy of this via her agent. My review will be up Monday.

‘Are these my basoomas I see before me?’ - Louise Rennison
Oh yes, the hilariosity goes on for one last time. Here it is…maybe probably…pants for the memories!
My marvy Luuurve God boyfriend has got the full Humpty Dumpty with me for accidentally twisting with Dave the Laugh.
Which is not actually my fault. I cannot be expected to control my body parts, they pop out unexpectedly and so on.
For instance my lips do ad-hoc puckering up every time Dave the Laugh comes near them, I don’t know why.
Ditto jelloid knickers.
Anyway shut up about Dave the Laugh, he has got a GIRLFRIEND.
Not that I care. Or do I?
Oh I don’t know, so many boys, so little time.
Brilliant. Absolutely genius, though I am sad that they’re over. You can see my review here.

The Bride’s Farewell - Meg Rosoff (UK proof)
On the morning of her wedding, Pell Ridley creeps out of bed in the dark, kisses her sisters goodbye and flees - determined to escape a future that offers nothing but hard work and sorrow.
The road ahead is rich with longing, silence and secrets, and each encounter leads closer to the untold story of her past.
And then she meets a hunter - infuriating, mysterious and cold. His fate appears to be strangely entwined with her own. Will he help her to find what she seeks? Or must she continue to search the earth, searching for love and lost things…

I love Meg Rosoff’s books so I’m extremely excited to start this one. Thanks to Hannah from Penguin/Puffin for sending me this.

That Summer - Sarah Dessen
For fifteen-year-old Haven this is the summer where everything changes.
Dad is remarrying. Her sister Ashley is planning a wedding of her own. They’re both moving on, but Haven is lost in memories of a time when her life was happy and her family was whole.
And then Ashley’s ex, the charming and funny Sumner Lee, arrives in town. He reminds Haven of carefree days gone by, and she can’t help but wonder - has fate brought this person back from her past to change her future?
I really love Sarah Dessen’s books so I’m so happy to finally read her first novel. Thanks to Hannah from Penguin/Puffin for sending me this.

Thirteen Reasons Why - Jay Asher (UK proof)
You can’t stop the future
You can’t rewind the past
The only way to learn the secret…
is to press play
Clay Jensen returns home to find a strange package with his name on it. Inside he discovers several cassette tapes recorded by Hannah Baker - his classmate and first love - who committed suicide two weeks earlier.
Hannah’s voice explains there are thirteen reasons why she killed herself. Clay is one of them. If he listens, he’ll find out why.
All through the night, Clay keeps listening - and what he discover changes his life…
Forever.
I’ve heard nothing but good things about this so I have very high expectations that I know it’ll meet. Thanks again to Hannah from Penguin/Puffin for sending me this.

Kiss of Life - Daniel Waters
When Phoebe’s best friend Adam takes a bullet for her, it proves everyone right - Adam is in love with her. And now that he’s come back to life, Phoebe’s more important than ever. A zombie can come back from death faster if they’re loved - and kissed…which means Phoebe has to say goodbye to Tommy Williams, the other zombie in her life.
While coaxing Adam back to reality and fending off Tommy’s advances. Phoebe tries to carry on as normal. But what’s normal when teenagers are rising from the dead and scores of others want nothing more than to send them back to their graves? And does having a zombie boyfriend make Phoebe a target too?
I’m so excited to read this. I’ve been waiting to find out what happened since Generation Dead’s evil cliff-hanger when I read it last July.

Chasing Daisy - Paige Toon
If you fall too fast…you might just crash
‘You don’t have to worry about me. I have no intention of getting my heart broken again.’

Of course, I’m lying. I feel like Will is chipping a little piece of it away, day by day, it’s killing me…
Daisy Rogers is in love - and that’s no good thing. It’s not just that her very famous ex is neither out of sight nor out of mind, but that man of her dreams, William Trust, has a girlfriend - a childhood sweetheart, no less. And as a Formula 1 racing driver, he puts his life at risk everyday he goes to work.
From Melbourne to Monte Carlo, and Sao Paulo to Singapore, daisy and her best friend Holly travel the world as hospitability girls on the Grand Prix scene. But with more secrets between them than Paris Hilton has shoes, life promises to be nothing short of a whirlwind.
Paige Toon is one of the few adult authors that I read. Her books are pure girly fun. 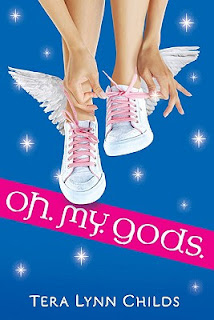 Oh.My.Gods. - Tera Lynn Childs
Phoebe’s life is about the get ungodly…
All Phoebe Castro has to do is keep her grades up and have another stellar cross-country season and her dream of attending USC with her friends on a track scholarship is a reality. So it’s a complete shock when her mom announces that she’s marrying a near-stranger and moving them to Greece.
Before Phoebe knows it, she’s stuck on a secret island in the Aegean and attending the super-exclusive Academy, where her new stepfather is the headmaster and the kids are anything but your average students - they’re descendents of the Greek gods, superpowers included. If regular high school wasn’t bad enough, this is mortal misery.
Phoebe’s only chance of reclaiming her old life lies in securing that scholarship. But managing that may be an ungodly challenge, considering she’s got a sabotaging stepsister from Hades and a gorgeous guy - what a god! - in her way…
This sounds like such a cute read! 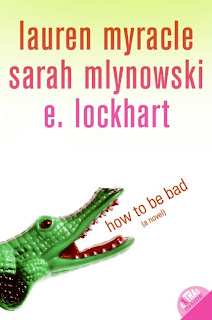 How to Be Bad - Lauren Myracle; Sarah Mlynowski; E. Lockhart
Vicks is the wild child whose boyfriend has gone suspiciously quiet since he left for college; Mel is the newcomer desperate to be liked; and Jesse will do anything to avoid a life-altering secret. Each one has her own reason for wanting to get out of their nowheresville town, even just for the weekend. So they climb in Jesse’s mom’s “borrowed” station wagon and head south.
Hearts will be broken, friendships will be tested, and a ridiculously hot stranger could change the course of everything.
I love books about road trips so I can’t wait to get stuck into this.

City of Glass - Cassandra Clare (!!!)
Amid the chaos of war, the Shadowhunters must decide to fight with the vampires, werewolves and other Downworlders - or against them. Meanwhile, Jace and Clary have their own decision to make: should they pursue the love they know is forbidden?
I actually squealed when this came through the door. I just wish they hadn’t changed the covers; they don’t match now!
This is one of the best book weeks I’ve had. I just don’t know what to read first!
Sophie
Posted by So Many Books, So Little Time at 10:04
Email ThisBlogThis!Share to TwitterShare to FacebookShare to Pinterest