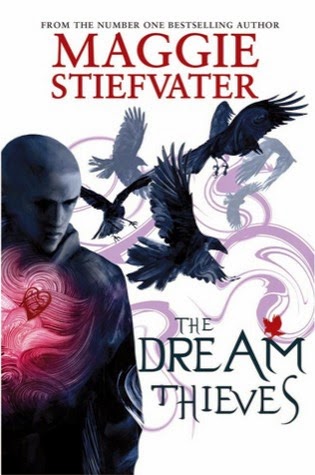 Blue didn’t mean to fall for the Raven Boys, be she has – and the more her life entwines with theirs, the more dangerous it becomes.

Ronan is the most dangerous of all.

He’s the haunted one, the darkest, the most raven.

His dreams invade reality and confuse what is true.

With magic growing stronger around them, now is a time to be wary. Before everything unravels...

Friendships will be tested.
Someone will get hurt.
And a kiss will be shared...

*There will be spoilers for The Raven Boys if you haven’t read it yet and/or intend too!*

Over the last few weeks everyone has been buzzing about the impending release of Blue Lily, Lily Blue, and then they were in raptures about it and having only read The Raven Boys when it came out, I was a little behind. I decided to do a re-read to catch up and, god, I’m glad I did.

I began The Dream Thieves only a minutes after The Raven Boys so everything was beautifully fresh in my mind, particularly the revelation of Ronan’s ability to pull things from his dreams. Definitely explained the title of the book! I really enjoyed Ronan having the spotlight. He’s a dark, twisty and incredibly complex character and I really love the way that he isn’t revealed to not be that dark, twisty and complex as soon as you get in his head. But I fell in love with him anyway. It’s his relationship with Gansey I especially love, however. They are brothers in the truest sense and the jealousy he felt at the way Gansey is with Adam hurt my heart, especially when you throw in his inability to focalise that feeling.

Ronan’s talent, or curse, led to a very interesting character being introduced: the Grey Man. His personality lived up to his name, not good but not entirely bad either; unnoticeable unless you’re looking; either an ally or an enemy. At first he was all questions: who is he? Why is he in Henrietta? What is he looking for? Why is he involved with Declan? I finally got all my answers which included some epic showdowns and unexpected revelations. That Stiefvater knows how to keep me on my toes!

And one of her most successful ways of keeping me on my toes: how to slow-burn a love story. Right from the beginning of Blue’s story Blue has been adamant that she is not in love with Gansey, though she loves being his friend and one of the Raven Boys. In The Dream Thieves she slowly starts to dissolve this notion. Watching the sparks of feeling for each other squashed down, hidden, denied was tantalising and it made it all the more special when Gansey and Blue had a flicker of a moment; it made me seriously hope Blue’s curse is not real because argh!

With an explosive ending The Dream Thieves has geared me up for Blue Lily, Lily Blue and made me wonder why I waited a whole, entire year to read it...

Thank you to Scholastic for this!