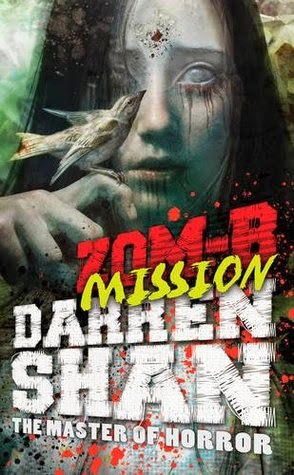 Leading a group of humans through London and out into zombie-infested suburbs sounds like suicide – but not for the undead! Even so, the horrors of the journey will be beyond anything B has yet seen...

‘Do not underestimate the dangers of this mission. Other zombies will not ignore you when they catch the scent of fresh brains. You will almost surely be called upon to fight.

The city and countryside are full of angry, bitter people who are trying to execute as many of the undead as they can. They will not distinguish between a revitalised and a revived. Most do not know the difference. And most would not care.

You’d think that by book seven this series would be getting a bit stale, but nope. I loved Zom-B Mission just as much as I did the previous six books!

We pick up with a B a few months after her rescue and decision to be a part of the County Hall family. The Angels have been training hard and are eager for a mission. The first part of their mission takes them from Westminster to Hammersmith. I love the way Shan writes about London. He is clearly very fond of the city and knows it well, and that really comes across. It makes me eager to jump on a train and go and wander around the capital for a few hours!

In Hammersmith, B meets someone she couldn’t even fathom was alive: her best friend, Vinyl, from before the zombies arrived. This brought back the reoccurring theme of racism the series as Vinyl is black. B had to hide her friendship with Vinyl from her dad for fear of a beating. It seems obvious now that with starving zombies eager for brains roaming the streets that race would be as irrelevant as it always should have been. Not quite. When B, Vinyl and the other Angels reach the safe suburban compound, that isn’t quite the case. It seems that racism has a tendency to appear whenever a large group of people amass in the same place, even when there’s been a zombie apocalypse. It’s horrifying and makes you wonder if it’s the humans rather than the zombies that are the true monsters. Then a group of people arrive and everything launches into chaos. And I’m not going to say who those people are, but you won’t be able to guess.

Bring on July and Zom-B Clans!