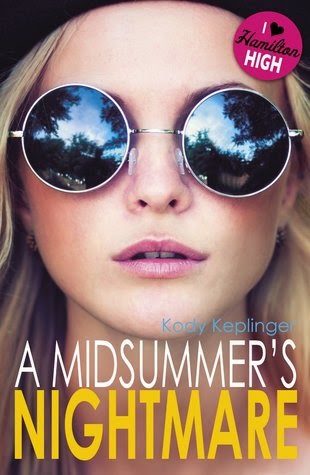 Other Titles by this Author: The DUFF, Shut Out, The Swift Boys and Me

Whitley’s dream summer of shopping, partying and tanning on the beach has just turned into a nightmare. Because her dad didn’t tell her he doesn’t live by the beach any more, or that he’s got himself a fiancée. A fiancée whose son just happens to be what’s-his-name from last week’s drunken graduation party hook up.

So hard that she doesn’t notice the good things right under her nose...

The DUFF was an unexpected love for a few years ago and I’ve been impatiently waiting for Kody Keplinger’s other novels to be published over here for what feels like forever. A Midsummer’s Nightmare was definitely worth the wait.

Kody Keplinger’s heroines have a bit of a reputation for being unlikable, and though Whitley is in some ways, I loved her. She’s real, full of emotion and actually has a genuine reason for her behaviour. I thought that the way Keplinger approached slut-shaming and cyber bullying through Whitley was really clever. Throughout high school, Whitley lost her best friend, her reputation and respect for all of the things that other people thought she was doing and spending a summer in a microscopic town meant that things skyrocketed, even if her actions were only a margin of what she had been getting up to at school.

I hate that people think they have a right to judge what a girl does with her body; it makes me incredibly angry. What makes me even angrier is those people’s belief that they have the right to vilify that girl for her choices, or what they think she is choosing to do. With the prominence of the internet, social media and technology at our fingertips, Whitley’s experience is, I imagine, worryingly present for a lot of teenage girls. What’s more is the reaction that being branded a slut or a whore that some people s perfectly acceptable. Just because a girl supposedly sleeps around, that doesn’t mean that no means yes or that you have any right to disregard her words or her feelings. I’m so, so glad that Keplinger writes these things with such honesty and openness as I imagine lots of people would shy away from confronting and discussing them in real life in case. Books like A Midsummer’s Nightmare might allow a girl to stand up for herself, realise she deserves respect or simply feel that she has the right to say no.

Slut-shaming wasn’t the only big issue that was tackled, however. I loved the take on broken families in A Midsummer’s Nightmare and I really didin’t expect it to be so prominent in the novel. Whitley’s dad left her, her brother and her mum six years ago, leisurely enjoying the bachelor lifestyle and seeing Whitley on every summer. A summer Whitley treasured. Finding out, with no warning whatsoever, that you dad has sold the condo you’ve spent the last few summers in and now has a fiancée with two children was a horrible shock. To then experience that perfect family and this new version of your dad who basically ignores you, well, Whitley’s pain, anger and confusion was palpable. I understood and related to how she felt and I kinda wanted to punch her dad in the face. There are few things more disarming that the feeling that one of the people who is supposed to love you unconditionally wants to replace you.

Then came the complication of sweet, nerdy and incredibly hot Nathan; her stepbrother to be. This storyline could easily have become a cliché, but it wasn’t at all. Though there was a little pining and a few intense, heated moments between the two, Keplinger built up a genuine connection between Whitley and Nathan, and it wasn’t all roses. It has a slow, delicious development and there was no sign of stereotypes of clichés: whoopee!

I adored A Midsummer’s Nightmare and there really needs to be more books like this in my life. Bring on Shut Out!

Thanks to Hodder for the review copy.