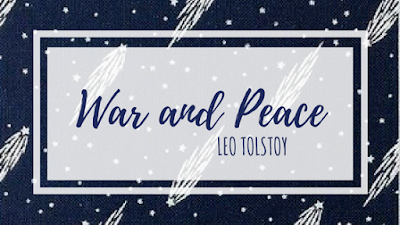 
Originally serialised in The Russian Messenger from 1865-67


WHEN I Discovered This Classic
I’m honestly not sure. It feels like I’ve always known about War and Peace. It’s a novel that in the literary world people pretend to have read or one they claim they will never attempt.


WHY I Chose to Read It
As with so many classics and period drama fans, I lapped up the stunning 6-part mini-series adapted by Andrew Davies for the BBC in 2016. I fell in love with the sweeping luxury of Russian high society and the bumbling Pierre and moody Prince Andrey. I was sold. And then last summer I read Anna Karenina and fell head over heels in love. I knew that I’d have to tackle War and Peace and decided to start it at the beginning of 2017.


WHAT I Thought of This Classic
This epic novel details the lives of Count Pierre Bezhukov, the Rostovs, the Bolkonskys and the people surrounding them, spanning 1805 to 1820, covering the period of several wars, but most significantly Napoleon’s invasion of Russia. We see them fall in and out of love, live and die, and navigate high society in times of peace and fight in times of war.


There’s no escaping how long War and Peace; my edition is 1440 pages long, 100 of which are notes on the text. I planned to read 7 chapters a day so I would finish it by the beginning of March. That didn’t quite go to plan and it ended up taking me nearly five months to conquer, but it really was worth it. And not just because of the pure triumph of turning that final page.


What I fell in love with in Anna Karenina was the breadth of the story, the unbelievable growth and development of the characters and the flaws in them. I couldn’t help but fall in love with hapless, dreamer Pierre; I learned to love moody, firm Prince Andrey; and I think Princess Marya is vastly underrated throughout the whole novel. As ever, the way Tolstoy portrays his female characters and the way they are treated inside marriages that started with grand declarations of love and equality don’t sit right with me, but I really do get the feeling that that is purely Tolstoy’s own views on marriage and the role of women at the time. Natasha, Marya and Hélène are all spirited and strong with distinct personalities.

One of the major worries about diving into War and Peace is the dullness of the war sections of the novel. I have to confess that, yes, some of the mundane scenes, the political ones, the ones detailing intricate histories are boring and it does take a degree of sticking power, but I found that the other sections of the story and characters kept me going. Those sections I flew through, even surprising myself.


It wasn’t until the second part of the epilogue where I genuinely wanted to stop reading. For the later books in War and Peace, Tolstoy definitely starts to lean towards explorations of philosophy and history, but it really came out in the epilogue. Of the 28 chapters only about a quarter of them actually feature the characters i’d spent the last 1300 pages with. Tolstoy waxed lyrical about historians and the recording of history, free will, cause and effect and the flaws in even trying to document a historical event because only the winners and the higher classes were able to do so. While all this has validity and relevance to the story, i really don’t think it had a pace in the epilogue. An introduction, an afterword, an author’s note, sure - just not an epilogue! It was dry, boring and I was very ready to be done at that point. If War and Peace was to go out on submission now, that definitely wouldn’t be there and I’m pretty sure it would lose about 400 pages!


But whining aside, I knew what I was signing up for and I really did enjoy the experience of reading Tolstoy’s masterpiece. It was a really worthwhile endeavour and I’m so freaking proud of myself for doing it! Even if it took me nearly twice as long as it should have done...


WILL It Stay a Classic
Of course! It is said to be one of the finest novels ever written, and the masterpiece of Russian literature.


WHO I’d Recommend it To
- Those interested in war, war history, Russian culture and politics.
- Fans of Russian literature.
- Those with serious reading stamina.


Review format from Stacey at The Pretty Books as part of the Classics Challenge.