44 The Fate of the Tearling, American Monsters & Stay With Me

I rated The Fate of the Tearling 3.5 stars, American Monsters 2.5 stars and Stay With Me got 4 stars. 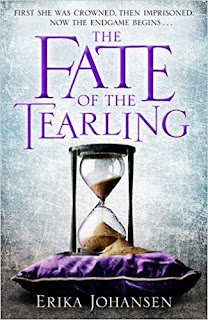 Synopsis
Since ascending to the throne, Kelsea Glynn has grown into a powerful monarch and a visionary leader.

But in her quest to end corruption and restore justice within the Tearling, she has made many enemies. Chief amongst them is the evil and feared Red Queen, who now holds Kelsea – and her magical sapphires – captive in her castle in Mortmesne, a deal brokered to protect the Tearling from a Mort invasion.

But the Tearling needs its Queen, and the Mace, head of Kelsea’s personal guards, will not rest until he and his men rescue their sovereign from her prison.

Now it is time for the fate of Queen Kelsea – and the Tearling itself – to be revealed . . .

Mini Review
I loved the first book in this trilogy and really enjoyed book two, but it really felt like The Fate of the Tearling dragged a little. It was a little underwhelming as a finale for me.

The novel was split between Kelsea’s story in the present and the visions Kelsea was having of Katie, the daughter of one of the women who made the Crossing with Tearling. While Katie’s story was interesting and important to what was happening in the present story, there was so much time dedicated to it that it almost felt like it overtook Kelsea and her predicament. It almost felt like Kelsea’s imprisonment was partly to allow for Katie’s story to take precedence. I wanted more Kelsea, Penn, the Mace and the rest of her guard - they were the characters I fell in love with and wanted to follow.

It was a disappointing end to a brilliant, political fantasy series and I wasn’t 100% convinced by the conclusion. 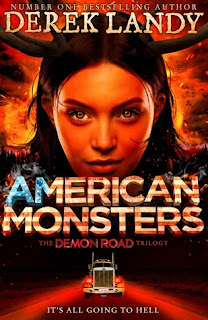 Bigger, meaner, stronger, Amber closes in on her murderous parents as they make one last desperate play for power. Her own last hopes of salvation, however, rest beyond vengeance, beyond the abominable killers – living and dead – that she and Milo will have to face.

For Amber’s future lies in her family’s past, in the brother and sister she never knew, and the horrors beyond imagining that befell them.

Mini Review
I loved the first book in the Demon Road series. It was one of my surprise reading hits of 2015 and I loved how quick, fun and witty it was. Then book two came along which was still good, but had a little second book syndrome, though my hopes were still high for the finale. And I was so disappointed.

In book two, I really didn’t like the way Amber’s non-demon appearance was constantly ridiculed and sneered at and though that was almost compensated for in a change in attitude in American Monsters, I still didn’t like the forceful ay Derek Landy wrote the female characters. It was so forceful, as if he was writing them to be ‘feminist’ because he knew he should - it didn’t align with anything else. I also didn’t think that the book was well written. The prose jarred and the speech felt insincere; I can’t help but think that this book was rushed out so he could refocus on Skulduggery Pleasant, his real money-maker, to the detriment of this series which could have been really, really good.

Thanks to NetGalley and HarperCollins for the review copy. 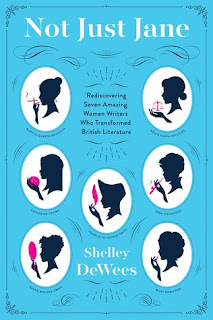 Synopsis
'There are things even love can't do . . . If the burden is too much and stays too long, even love bends, cracks, comes close to breaking and sometimes does break. But even when it's in a thousand pieces around your feet, that doesn't mean it's no longer love . . .'

Yejide is hoping for a miracle, for a child. It is all her husband wants, all her mother-in-law wants, and she has tried everything - arduous pilgrimages, medical consultations, appeals to God. But when her relatives insist upon a new wife, it is too much for Yejide to bear. It will lead to jealousy, betrayal and despair.

Unravelling against the social and political turbulence of 1980s Nigeria, Stay With Me sings with the voices, colours, joys and fears of its surroundings. Ayobami Adebayo weaves a devastating story of the fragility of married love, the undoing of family, the wretchedness of grief, and the all-consuming bonds of motherhood. It is a tale about our desperate attempts to save ourselves and those we love from heartbreak.

Mini-Review
Shortlisted for the Baileys Prize for Women’s Fiction and all over the Internet, Ayobami Adebayo’s Stay With Me is everywhere. And for good reason.

I was actually really unsure of this for the first third of the novel. I found the cultural differences jarring and I struggled to wrap my head around the situation that Yejide found herself after her marriage to Akin, but I eventually became utterly engrossed. The Nigerian political unrest of the 80s and 90s was the backdrop to their struggle to conceive and live with the pressures to have a family. I did still struggle with the alien-ness of some aspects of their life and culture and it made me realise just how little I know about that part of the world.

I really don't want to spoil this beautiful, heartbreaking and surprising novel, but I was definitely that: continually surprised. Adebayo really keeps you on your toes and turning pages as fast as you can. I cried, I gaped in shock and I’m so glad I persevered. Beautiful.