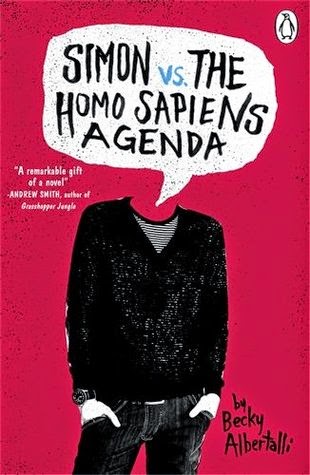 Sixteen-year-old and not-so-openly gay Simon Spier prefers to save his drama for the school musical. But when an email falls into the wrong hands, his secret is at risk of being thrust into the spotlight. And worse still, so will the privacy of ‘Blue’, the pen name of the boy he’s been emailing.

With messy dynamics emerging in in Simon’s once tight-knit group of friends, and his email correspondence with Blue growing more flirtatious every day, Simon’s life suddenly becomes just a little complicated.

Now Simon has to find a way to step out of his comfort zone before he’s pushed out – without alienating his friends, compromising himself, or a fumbling shot at happiness with the most confusing, adorable guy he’s ever met.

You know how everyone has been singing the praises of Simon Vs the Homo Sapiens Agenda for ages now? It's all completely true!

Simon is adorable. I love that he's not super cool or super weird, not crazy popular or a loner; he's a generally happy, quirky and funny guy who falls in love with a mystery guy over emails. The story doesn't revolve around Simon coming to terms with his sexuality, but his forced coming out and learning the ropes of his new life almost - it reads as a contemporary romance YA. I loved it.  -

Simon and Blue's email exchanges throughout Simon vs the Homo Sapiens Agenda pretty much gave me a perma-smile. The cuteness, the flirty, the geekery, the innuendos - it's just perfect. The way they gradually revealed snippets of their personalities and their lives and Simon made wild speculations about the identity of Blue. I did eventually guess who Blue was but it didn't make me love the reveal and the resulting smooches any less.

Although Simon's burgeoning relationship with Blue and the challenges that they face in revealing their identities and their real lives takes centre stage, other relationships aren't left behind. The strength of the friendship between Simon, Nick, Abby and Leah is one of my favourite elements of the novel. A group that have been friends since early childhood welcoming in crushes, family troubles and new additions to the group and all which that effects took me straight back to high school.There are few things as scary as the fear of losing your best friends to someone newer, brighter, shinier than you and the battle of wills between Leah and Abby showed this beautifully. The fact that there were awkward moments, fights and hurt feelings made it achingly real.

Then there's Simon's family. It's still strangely rare to find a sibling relationship that isn't all out war so Simon's connection wit his sisters, Alice and Nora, was a breath of fresh air. There were the normal ups and downs but an overwhelming affection and a lifetime of in-jokes. It made me want to see all of my siblings and try and build something of what they had. Simon's parents are pretty cool, as well. They're funny and slightly odd and they just all fit together; it made sense that Simon, Alice and Nora came from them and you usually get the parents and children posed as polar opposites.

Becky Albertalli's debut is a touching and funny tale of awkward, lovable Simon falling head over heels in love. I want to read it all over again.

Thanks to Puffin and NetGalley for the review copy.