I’m thrilled to present an exclusive extract from Glee: The Beginning, the Glee prequel, courtesy of Headline. Enjoy! 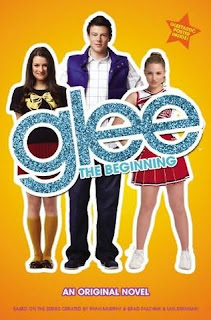 ‘As you know, Principal Figgins, McKinley High School has a sadly limited number of creative outlets for performance minded students such as myself.’
It was true. For as long as she could remember, Rachel’s fathers had let her enroll in any sort of activity she wanted – tap and ballet and, briefly, hip-hop. Vocal training, piano lessons, acting lessons. Public speaking training. Improv. Pageantry. Anything that allowed Rachel to be onstage. But once she got to high school, her options seemed to disappear. It was all politics in high school.
‘Yes, well.’ Principal Figgins pushed his hair back, showing his receding hairline.
‘Budget cuts make that a very tricky subject. I’m not sure there’s anything I can do.’
‘But there is, sir.’
Rachel believed that when people gave no as an answer, they were usually just too lazy to try and figure out how to say yes.
‘Enlighten me, then.’
Rachel had prepared a whole speech this morning while she did thirty minutes on the elliptical trainer in her bedroom. She was a firm believer in holistic health. She woke up early each morning to do either a cardio workout or yoga. This routine helped keep her balanced.
‘I realized that there is one underutilized outlet that’s just being wasted away – and that I would like to be allowed to take over. The morning announcements.’
She waved her arms in a flourish, as if she had just announced an Oscar winner.
‘But Mrs Applethorpe has always . . .’
‘I know, sir.’
Mrs Applethorpe was the attendance officer who, each morning during first period, read the daily announcements with the enthusiasm of a mortician.
‘But I thought it would be fair to let someone else give it a try. Someone who could really pep up the announcements.’
It was hard to stay still in her seat when Rachel felt so close to success. What better way to make herself – and her amazing voice – known? It was the closest thing the school had to a radio broadcast. And it was a captive audience – no one could change the station on her! After all, many important celebrities had got their start in radio, like Ryan Seacrest. Not that he’s as talented as I am, Rachel thought.
Extract before:
Number 3. http://thebeaucoupreview.blogspot.com/

And the following extract you need to link to will be on:
Number 5. http://www.mostlyreadingya.blogspot.com/