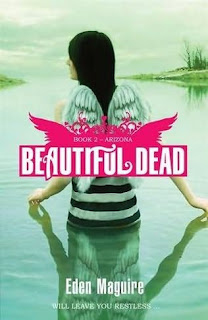 Beautiful Dead: Arizona - Eden Maguire
Pages: 276
Publisher: Hodder
Release Date: 15th October 2009
Other Titles in the Series: Jonas (my review), Summer (06/05/10), Phoenix (2010)
Not alive. Not dead. Somewhere in between lie the Beautiful Dead.
There’s been no sign of the Beautiful Dead for weeks. Darina achingly misses Phoenix all over again. Surely he will return to help her solve the remaining mysteries.
It’s been a year since Arizona drowned in Hartman Lake. Suicide, it would seem. But something doesn’t add up… Drowning herself in a lake does not sound like strong, confident Arizona: Ellerton High School’s high-maintenance drama queen.
Darina must help Arizona the way she helped Jonas. But invisible wings are beating, the Beautiful Dead are in danger and time is running out…
The second instalment of the Beautiful Dead series is as engaging and easy to read as the first.
I really love the mysteries of Jonas, Arizona, Summer and Phoenix’s deaths. the ones that we’ve explored so far are no where near as simple as they first seem. I love being so completely wrong about what really happened! To me, that’s one of things that say great writing.
In Arizona, we learn a lot more about Hunter’s history and also the level of control he has over the Beautiful Dead. Darina isn’t exaggerating when she calls him a ‘zombie overlord’! He’s the only one of them that actually seems like a zombie and scares me a little. I hated the fact that he kept Phoenix and Darina apart in the beginning and then continues to restrict their time together later on, though. Haven’t they been through enough?!
One of the things that I love most about the Beautiful Dead series is the atmosphere that the setting creates. It’s not explicitly stated what state they’re set in, but they have a laid-back, languid American Midwest feel to me. It makes me even more fed up with my boring and rainy English town than I already am!
I thoroughly enjoyed Beautiful Dead: Arizona and I’m really looking forward to reading Summer next year.
Sophie
Posted by So Many Books, So Little Time at 09:00
Email ThisBlogThis!Share to TwitterShare to FacebookShare to Pinterest