I was browsing Amazon, as I often do and I came across this. 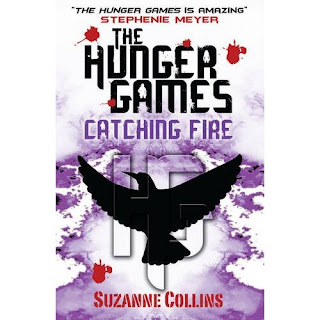 The UK cover for Catching Fire - Suzanne Collins. I was so excited that I had to share it with you all.

From Amazon: After winning the brutal Hunger Games, Katniss Everdeen returns to her district, hoping for a peaceful future. But Katniss starts to hear rumours of a deadly rebellion against the Capitol. A rebellion that she and Peeta have helped to create. As Katniss and Peeta are forced to visit the districts on the Capitol's cruel Victory Tour, the stakes are higher than ever. Unless Katniss and Peeta can convince the world that they are still lost in their love for each other, the consequences will be horrifying. This is the terrifying sequel to The Hunger Games.

Catching Fire is released in the US and the UK on 7th September 2009.

Sorry about the last of posts this week but I had my first exam today and I'v got another on Wednesday. After that's out of the way things will be back to normal unitl the beginning of June when they start again. Have a great weekend everyone!

Sophie
Posted by So Many Books, So Little Time at 20:16
Email ThisBlogThis!Share to TwitterShare to FacebookShare to Pinterest