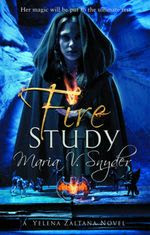 Fire Study - Maria V. Snyder
Pages: 441
Publisher: MIRA Books
Release Date: 16th January 2009
Other Titles in this Series: Poison Study (my review), Magic Study (my review)
The apprenticeship is over.
Now the real test has begun.
When word that Yelena is a Soulfinder - able to capture and release souls - spreads like wildfire, people grow uneasy. Already Yelena’s unusual abilities and past have set her apart. As the Council debates Yelena’s fate, she receives a disturbing message: a plot is rising against her in her homeland, led by a murderous sorcerer she has defeated before.
Honour sets Yelena on a path that will test the limits of her skills, and the hope of reuniting with her beloved spurs her onward. Her journey is fraught with allies and enemies. Yelena will have but one chance to prove herself - and save the land she holds dear.
Fire Study is the action-filled conclusion to Yelena’s story. It’s the most exciting of the trilogy by far.
The action and adventure began almost instantly and continued throughout the entire book. Yelena and the rest of the characters didn’t stop. They were always fighting for their lives, escaping on their horses or planning their next attack. I felt exhausted for the characters! For some reason, I got a bit fed up of all of the fighting and at some points, I just couldn’t wait for Fire Study to end.
I liked some of the background characters more than I did the main ones (apart from Valek, of course!). I really loved Kiki. Her loyalty and love for Yelena was heart-warming, and for a horse, she’s pretty wise and very charming! I really looked forward to the interactions between Kiki and Yelena for this reason. The other character that I really liked was the Commander. His character continued to develop throughout the trilogy and the reasons for the way that he rules Ixia became apparent. Lots of shocking revelations were made about him that made me like him even more.
But what I liked most about Fire Study was the happy ending. At times it seemed like there was no chance of it ending happily, but it did. Rather cheesily, good conquered evil and they all (well, most of them) lived happily ever after. But I love cheesy endings so I was perfectly happy!
The Study trilogy will appeal to anyone who enjoys reading about a strong heroine learning who is whilst embroiled in magic and adventure.
Sophie
Posted by So Many Books, So Little Time at 19:19
Email ThisBlogThis!Share to TwitterShare to FacebookShare to Pinterest