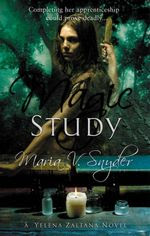 Magic Study - Maria V. Snyder
Pages: 419
Publisher: MIRA Books
Release Date: 16th May 2008
Other Book in the Series: Poison Study (my review), Fire Study
Confronting the past.
Controlling the future.
With an execution order on her head, Yelena has no choice but to escape Sitia, the land of her birth. With only a year to master her magic - or face death - Yelena must begin her apprenticeship and travels to the Four Towers of the Magician’s Keep.
But nothing in Sitia is familiar. Not the family to whom she is a stranger. Not the unsettling new facets of her magic. Not the brother who resents her return. As she struggles to understand where she belongs and how to control her rare powers, a rogue magician emerges - and Yelena catches his eye.
Suddenly she is embroiled in battle against good and evil. And once again it will be her magical abilities that will either save her…or be her downfall.
Magic Study is the fantastic sequel to Poison Study. I liked this one a lot more than the first one as there was a lot more romance. And I love romance!
The Zaltana’s home in the jungle canopy was amazing. It was basic and yet everything that they needed with only a few simplified modern technologies like Esau’s vine pulley lift. The jungle is loud, colourful and bursting with life.
The differences between Sitia and Ixia are startling. When Yelena was in Ixia Sitia seemed like a magical place to be, but when she got there and it’s reality was exposed, I immediately preferred Ixia. It’s sense of justice and organisation trumped Sitia’s winner-takes-all society that is much like ours. Although, I do love the magic and tree-top living of Sitia.
I loved the variety of magical abilities that we learned about in Magic Study. from healing to body swapping to starting fires with the mind. The variety of skills and abilities and the capabilities of the different magicians really illustrated how exceptional Yelena’s magic is.
I really enjoyed Magic Study and I’m looking forward to seeing how Yelena’s story concludes in Fire Study. I really want her to be reunited with Valek!
Sophie
Posted by So Many Books, So Little Time at 11:47
Email ThisBlogThis!Share to TwitterShare to FacebookShare to Pinterest