In My Mailbox III

When Dusty gets the phone call from a mysterious boy she knows she can't ignore it. He seems to know something about the disappearance of her brother, Josh, which means that Dusty must find the boy no matter what.

But when she does finally meet him, there's something strange and haunting about him. He can see people's thoughts, and feels everything-from chilling ice to white-hot pain...and he seems to have a hold over everyone he meets.

There's talk in the town of the boy's past. Lynch mobs are out to get him. Dusty must help him and find out what happened to Josh. But when the mob turns on her, it is she, and not the boy, who is in the gravest danger...

Amy got this last weekend but I forgot to include it in last weeks In My Mailbox.

Tally has finally become pretty. Now her looks are beyond perfect, her clothes are awesome, her boyfriend is totally hot, and she's completely popular. It's everything she's ever wanted.

But beneath all the fun -- the non-stop parties, the high-tech luxury, the total freedom -- is a nagging sense that something is wrong. Something important. Then a message from Tally's ugly past arrives. Reading it, Tally remembers what's wrong with pretty life, and the fun stops cold.

...the words have sent chills down Tally's spine since her days as a repellent, rebellious Ugly. Back then, the Specials were a sinister rumour - frighteningly beautiful, dangerously strong, breathtakingly fast.

And now Tally's become one of them: a superamped fighting machine, engineered to keep the Uglies down and the Pretties stupid. The strength, the speed and the clarity of her new powers feel amazing...most of the time. One tiny corner of Tally's heart still remembers something different.

When she is offered the chance to stamp out the rebels of the New Smoke, she is forced to make one last choice: carry out the mission she's been programmed to complete, or listen to that faint yet persistent heartbeat telling her that something's wrong...

These days, it's all about fame...

'Tech-heads' flaunt their latest gadgets, 'kickers' spread gossip and trends - and it's all monitored by millions of cameras. The world is like a giant reality TV show, where popularity rules and everyone else is just an extra.

As if it isn't hard enough being fifteen, with a face rank of 451,369, Aya Fuse is a total nobody. But when she meets a clique of girls who pull crazy, dangerous tricks in secret, Aya knows that if she can kick their story, her popularity rating will soar...

Aya is sure she's destined for a life in the spotlight, but is she really prepared for everything that comes with it - instant fame, celebrity...extreme danger? 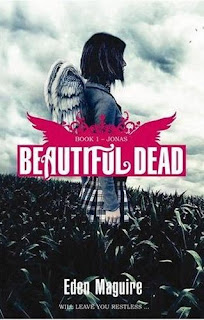 Beautiful Dead: Jonas - Eden Maguire
Not alive. Not dead. Somewhere in between lie the Beautiful Dead.
The first of four books that will leave you restless...
Something strange is happening at Ellerton High. Jonas, Arizona, Summer, Phoenix. All dead within a year.
Darina, Phoenix's grief-stricken girlfriend, is on the verge. She can't escape her intense heartache, or the impossible apparitions of those who are meant to be dead.
And all the while the sound of beating wings echo inside her head...
Will love conquer death? And if it does, can Darina set it free?
Thank you to the fabulous Jenny at Wondrous Reads for this book.
Sophie
Posted by So Many Books, So Little Time at 11:27
Email ThisBlogThis!Share to TwitterShare to FacebookShare to Pinterest