In My Mailbox I 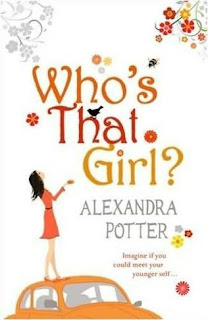 Who's That Girl? - Alexandra Potter


If only you knew then what you know now...

Imagine if you could go back ten years and meet your younger self - would you recognise her? What advice would you give?

- Back away from those PVC trousers

- DON'T give that idiot your phone number

For Charlotte Merryweather, there's no need to imagine. She's about to find out for real. With some surprising consequences...

I've just started this and it's already living up to the expectations left by Be Careful What You Wish For and Me & Mr Darcy. Fantastic.

In a dark vision of the near future, a terrifying reality TV show is taking place. Twelve girls are forced to appear in a live event called the Hunger Games. There is only one rule: kill or be killed.

When sixteen-year-old Katniss Everdeen steps forward to take her sister's place in the games, she sees it as a death sentence. But Katniss has been close to death before. For her, survival is second nature.

I've been seeing amazing reviews of this everywhere and finally decided to give it a go. I actually can't wait to begin it, especially as it was recommended by Stephenie Meyer. It must be brilliant.


It's 1895, and after the death of her mother, 16-year-old Gemma Doyle is shipped off from the life she knows in India to Spence, a proper boarding school in England. Lonely, guilt-ridden, and prone to visions of the future that have an uncomfortable habit of coming true, Gemma's reception there is a chilly one.She's not completely alone, though...she's being followed by a mysterious young man, sent to warn her to close her mind against the visions.

It's at Spence that Gemma's power to attract the supernatural unfolds, as she becomes entangled with the school's most powerful girls and discovers her mother's connection to a shadowy, timeless group called The Order. Her destiny awaits...if only Gemma can believe in it.

This is another book that I've heard great things about but have put off reading for some reason but again I'm really looking forward to it and expecting to really love it.

Knife woke in a cold sweat, the torn edge of her wing sizzling with pain. how long had she lain unconscious? Her worst fears had come to pass: she was trapped, flightless, a prisoner. The humans had put her in a box, and now they had come to torment her...

This is a book that Amy bought this week. She's started it and told me that "it's okay" but I can't wait to read it and will definately be borrowing it in the future. This Amy's first faerie novel so I forgive her hesitancy; it's nothing like she's ever read before.

Posted by So Many Books, So Little Time at 16:16
Email ThisBlogThis!Share to TwitterShare to FacebookShare to Pinterest