The Day I Met JK Rowling

On Friday 8th March I got to do something that I never thought I would get the chance to do: meet JK Rowling. An immensely private person who does few events and promotion, what were the chances? How lucky am I that I happened to be in Bath while James Runcie was the artistic director of the Bath Literature Festival; a friend of Jo, he declared that he couldn’t finish his run without bringing her in.

This was an event that I knew of months in advance. The tickets went up on the Bath Festivals website and my Twitter and Facebook exploded with excitement and I raced to nab myself a ticket, making sure to let Carly of Writing From the Tub that they were available. Even though we got them pretty swiftly after they went up, we weren’t able to get seats together and ended up on opposite sides of The Forum. The 1630 seat auditorium was sold out.

In preparation for such an event, Carly and I met for dinner and a gossip at The Westgate before heading over to The Forum. As we approached we saw a queue stretching right round the back of the building which we begrudgingly joined. Luckily for us, after only a few minutes the girls in front of us let us know that that was for collecting tickets. We had our tickets in our hands...

We took a smug walk past all of the queuing fans and went to take our seats. The event started around ten minutes late as it took so long to get everyone in, but we were promised we’d get our full hour. Phew! After being introduced twice, Jo finally took the stage to deafening applause.

In a relaxed and open conversation with James, Jo told us lots of interesting things about The Casual Vacancy, Harry Potter, her writing life and why she writes for adolescence:

- The idea for The Casual Vacancy came to her on a plane with Krystal at the centre.
- She wanted to write about the widespread effect of an election in a small, pretty and unassuming village.
- Jo loves all of her characters, even the bad ones. She believes in good nature not too.
- Adolescence is a fragile time fraught with possibilities that aren’t always open to everyone and that’s what she wanted to demonstrate. Those restrictions of situation that aren’t represented often fascinate her.
- She’d recently dreamt about Harry and Ron with herself as herself in the dream which provoked a joke about her open secret of being Hermione.
- Hermione was written as the friend Jo would want – plain and clever. She told us that Hermione’s insecurities are hers as well.
- We were told the story of Dumbledore being outed at Carnegie Hall where in the signing that followed, a boy declared that he’d come out to his friends in response. Jo said it was one of her proudest moments.
- A discussion about teenagers and parents led to JO sharing details of her first: twelve at the school disco with a boy called Charles.

The Q&A brought up lots of questions about writing, advice and Jo’s writing life:

- She writes when she can, which isn’t every day as she has a family and a life. Though there are certain times where she just has to write something down.
- The isolating loneliness that comes with writing is something that she craves. She feels that she’s temperamentally suited to being a writer.
- Her mind clicks in to whatever she’s writing and becomes fully involved in that world.
- When it came to advice for aspiring writers she said that if you want to do it, you probably already are.
- Jo believes in traditional publishing methods and emphasised that value of an editor.
- She then announced that she is currently writing a new children’s book, likely to be a little younger than Harry. She’s not very far through yet and when James asked when it would be out, she responded with a mock-severe, “When it’s ready!”.

After the Q&A and a brief interlude where a member of the audience had a coughing fit and Jo stopped to check she was okay and everybody in the audience had fallen even more in love with her, the signing began.

After about twenty minutes of people leaving, orders being thrown out to stay in your seats if you want a book signed until your row was called, Jo came back on the stage to another round of applause.

The seat next to Carly was empty so I ran over and sat to wait with her. At around twenty past ten, my row was called – N, if you were wondering. I queued up, book open at the title page ready for my holographic sticker. Very official. And shiny. The queue was incredibly fast-moving with each person getting about 30 seconds to a minute each with Jo. As I approached the stage I was feeling rather sick with nerves and I was shaking. It was crazy. 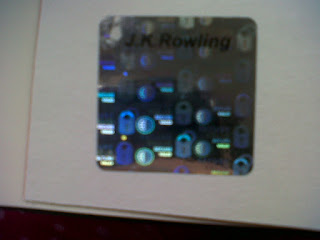 When I arrived at the table she said hello and I thanked her for Hermione and Luna. I told her how much I appreciated being able to grow up alongside characters like them. She looked me in the eye and thanked me. That was the point where I nearly cried. I managed to pull it back though. Just. I drifted back to Carly gazing at my signed book and we chatted until she was called up. 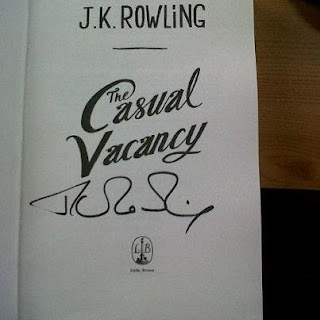 While Carly was queuing, I went and joined a crowd of people trying to get a good snap of Jo so I could get one of Carly at the table with her. You would not believe how difficult it was to get a clear view between the furious stream of people. I had lots of backs and bums on my camera, but I did manage to get a few decent ones.
After Carly had her book signed, she drove me home with us both fawning over Jo and dramatically declaring how we’d never forget that event. It’s true though. JK Rowling is warm, funny, sharp, intelligent and brilliantly charming: my expectations were met and then exceeded. I met one of my heroes; it’s something to cross off my bucket list, and I’m now desperate to re-read Harry Potter in its entirety...