Exploring Classics: The Diary of a Provincial Lady 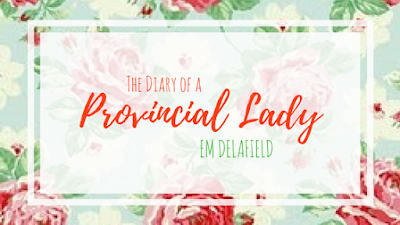 Originally serialised in Time and Tide in 1930.

My edition: the VMC Designer hardback.

WHEN I Discovered This Classic
I think I first saw this when Sarra Manning mentioned it. And then she mentioned it again. And again. And then I started collecting the VMC Designer editions and well, I had to.

WHY I Chose to Read It
Sarra Manning. It was a podcast called The Books That Built Me which Sarra was a guest on that finally pushed me over the edge!

WHAT I Thought of This Classic
This book is pretty much what the title says it is. A series of diary entries about an unnamed provincial lady as she wrestles with unreliable staff, an uninterested husband and constantly battles with the irritating Lady Boxe. And it’s wonderful.

There's no real plot to this series of diary entries, it's just the day to day life of an upper class provincial lady living in the country with her husband, two children and bothersome servants. It's soft and ambling and an insight into the daily life in the 1930s that would usually be ignored in favour of high drama, a big romance or a scandal.

The provincial lady's fixation on growing bulbs, her tireless efforts to fit in (which never really work) and her consistently bad approach to money are fascinating and sound as if they should be boring, but it's actually not at all. If you like stories led by characters and the ups and downs of daily life, The Diary of a Provincial Lady is for you. it's the type of book I can imagine passing on to my mum and then my nan as well. I think they both would have enjoyed it a lot.

The Diary of a Provincial Lady is the perfect book to devour on a rainy Sunday afternoon while dreaming of summer.


WILL It Stay a Classic
This novel hasn’t been out of print since it was published in 1930. I don’t think it’s going anywhere!

WHO I’d Recommend it To
- Fans of Nancy Mitford.
- Those who want a cosy Sunday afternoon read.

Sophie
Posted by So Many Books, So Little Time at 19:07
Email ThisBlogThis!Share to TwitterShare to FacebookShare to Pinterest