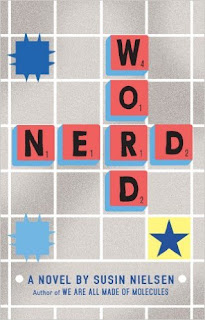 Other Titles by this Author: We Are All Made of Molecules, The Reluctant Journal of Henry K Larsen

Ambrose Bukowski is a twelve-year-old with a talent for mismatching his clothes, for saying the wrong thing at the worst possible thing, and for words. In short, he’s a self-described nerd. Making friends is especially hard because he and his overprotective mother, Irene, have had to move so often. And when bullies at his latest school almost kill him by deliberately slipping a peanut into his sandwich to set off his allergy, it’s his mother who has the extreme reaction. From now on, Ambrose has to be home-schooled.

Then Ambrose strikes up an unlikely friendship with the landlord’s son, Cosmo, an ex-con who’s been in prison. They have nothing in common except for Scrabble. But a small deception grows out of control when Ambrose convinces a reluctant Cosmo to take him to Scrabble club. Could this spell disaster for Ambrose?

I’m a big fan of Susin Nielsen’s books, but I didn’t completely click with Word Nerd; I found Ambrose really quite annoying. I mean, I get that his lack of a filter and tendency to be a big smug and over-dramatise everything is his personality, but it grated. Although he was irritating, I did find him weirdly charming and I felt very protective over him.

As ever, Susin Nielsen tackles some big issues in a subtle and sensitive way. Word Nerd talks about grief, loneliness, PTSD, bullying, addiction and more in only 250 pages and that’s not a mean feat! I loved watching Ambrose, his mum and Cosmo come face to face with those issues and work through them, coming out stronger on the other end because of their connections with each other. It made my heart smile.

Though Word Nerd wasn’t my favourite book from Susin Nielsen so far, it was fun, easy and enjoyable and I’m looking forward to whatever’s next from Nielsen.