I am a total wuss, but I love Halloween. I love the tacky, over-the-top decorations; the ridiculous costumes; the genuinely amazing costumes; and the crisp, cold, creep in the air. But I hate being jumpy. Gore, grossness, outright horror is fine with me, but the psychological stuff that creeps into your nightmares? No thanks.

Just in case you’re like me, here are some amazing Halloween TV shows, films and books to read that won’t make you pee your pants. Basically, Halloween for wusses. 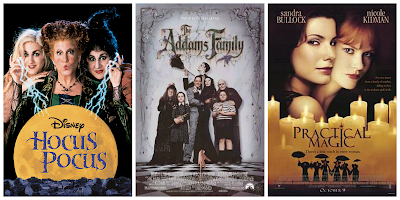 ‘Hocus Pocus’
Who doesn’t love ‘Hocus Pocus’? When a brother and sister accidentally bring three ancient Salem witches back to life, they terrorise their small town. It’s up to Max, Dani and Allison to put them back where they belong. With the help of an immortal cat, of course.

It’s fun, delightfully 90s, nostalgic and so, so perfect for the Halloween Wuss.

‘The Addams Family’
This is another cult classic that everybody loves! Even though I'd seen it many times as a kid, last year was the first time I'd watched ‘The Addams Family’ in over 10 years and I'd forgotten how good it is. When Uncle Fester returns after being lost in the Bermuda Triangle for 25 years, the Addams’ plan the celebration to end all celebrations.

Morticia and Gomez are total couple goals and Wednesday is just 100% brilliant. LOVE.

‘Practical Magic’
This was a favourite film of my mum’s and one we ended up watching whenever it was on TV and so I fell in love with it too. Two sisters are cursed to have their lovers die well before their time so when two new men arrive on the scene, they take to the spells of their aunt to see if they can change the course of the curse.

This is so good. It’s very different to the previous two films, but the kickass cast are on point. 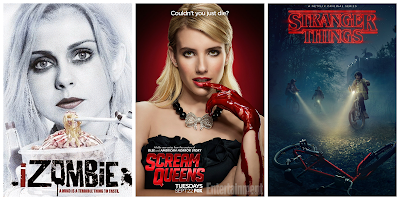 ‘iZombie’
I fell in love with this quirky zombie show earlier in the year after Stacey from Pretty Books told me how good it was. She was so right. When Liv, a doctor, is turned into a zombie on a boat party, she transfers to the county morgue to get her fill of brains and still try to live a normal life. But the brains she eats give her flashes of the life and death of the victim which enables her to start solving murders.

I know this sounds weird, but ‘iZombie’ is really funny. It’s quick and sharp and the cast are all brilliant. I particularly love Liv’s boss Ravi – he’s adorable.

‘Scream Queens’
I have to admit to being woefully behind on this show, but I've loved what I've seen so far. It’s part comedy, part slasher, part murder mystery. When the anti-sorority Dean declares that everyone must be able to join sororities, all hell breaks loose and a killer dressed as the Devil begins to rampage across the school.

It's clever, funny and completely ridiculous. So much fun.

‘Stranger Things’
I'm pretty sure the whole of the Western world has already seen this, but if not: In small-town American in the 80s, a boy goes missing as a girl with physic abilities appears. It’s up to the boy’s friends and the new girl to track him down before time runs out.

A killer soundtrack, perfect 80s nostalgia, serious friendship goals and an epic story, what’s not to love about ‘Stranger Things’? 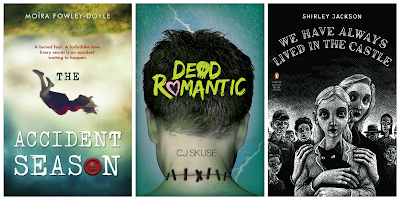 ‘The Accident Season’ by Moira Fowley-Doyle
Every October Cara’s family become inexplicably accident-prone, getting worse throughout the month and culminating on Halloween – the most dangerous day of the year. They must lock away everything even slightly dangerous and gear themselves up for whatever may befall them this year.

This is a gorgeous, lyrical, dreamy book and a perfect example of really unsettling magical realism. It’s the perfect novel to devour during the gloomy Halloween season.

‘Dead Romantic’ by CJ Skuse
Camille is desperate to find the perfect boy – body of an athlete and the brain of a poet, ideally – but she knows it’ll never happen. Then her, slightly strange, friend Zoe suggests an alternative, why don’t they make one themselves?

Think high-school ‘Frankenstein’ with CJ’s trademark black humour and serious wit and you’ve got a winner. This is perfect Halloween reading.

‘We Have Always Lived in the Castle’ by Shirley Jackson
I discovered Shirley Jackson when I read this novel last Halloween and fell head over heels in love. When Constance Blackwood is acquitted of murdering the family, her sister Merricat expects to go back to normal, but their town refuses to forget the accusations. Then Cousin Charles arrives and Merricat must do everything in her power to protect those left close to her.

This book is creepy, haunting, whimsical and just plain extraordinary. If you haven’t read it yet, you really, really need to. And then tell me so we can gush about it!

Tell me your Halloween for wusses suggestions!