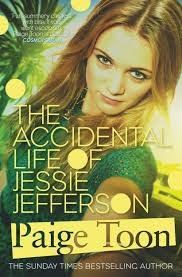 Other Titles by this Author: Lucy in the Sky, Johnny be Good, Chasing Daisy, Pictures of Lily, Baby Be Mine, One Perfect Summer, The Longest Holiday

My love for Paige Toon’s novels is no secret, so the announcement that she was writing a YA series spinning off from my favourite of her books made me squeal with joy. Rightly so because The Accidental Life of Jessie Jefferson was awesome.

I have to admit that I struggled to read it at first. Not because I worried that I wouldn’t live up to her adult novels. Not because of my fear Jessie may cause issues between Johnny and Meg. But because of the whole recently dead mum thing. It’s a subject that seems to pop up in everything that I read lately, but this was the first time I nearly couldn’t handle it. Jessie’s grief was gut-wrenching. The random memories sparked by seemingly insignificant moments that came suddenly and unexpectedly brought mine flooding back, the realisations of all of the things she would never get to say to her mum, do with her, see with her. It made me cry a few times with the sheer emotion of the moments. Don’t get me wrong, Paige Toon has always been able to make me cry, but this...wow. It punched me in the heart.

Once I got past all of the emotion and the story really started to move, I was able to get stuck headfirst into it. It was so nice to be back in LA with Johnny, Meg, Barney and new addition to the family, Phoenix. Johnny Be Good and Baby Be Mine are two of my favourites of Paige’s and I fell in love with Meg and Johnny completely and I have to admit that as soon as Jessie met them, I was focusing a little more on Meg than Jessie at points!

Seeing Meg from an outsider’s point of view and Johnny from someone not overcome by his hotness was weird and strangely cool. And I still adored them; in fact, I think it grew in some ways. Seeing how in love they are, how great Johnny is with his boys, how much they’ve both changed since the beginning of Johnny Be Good made me all warm and squishy inside. Seeing Jessie trying to fit into that unit was excellent. She’s so much like her dad! Not just the blonde hair and piercing green eyes, but the attitude, tendency towards lashing out and pushing down issues instead of confronting them.

The Accidental Life of Jessie Jefferson is another stunner from Paige Toon and I can’t wait to see how Jessie and Johnny handle being father and daughter in the public eye. Bring it on!

Huge thanks to S&S for the review copy!