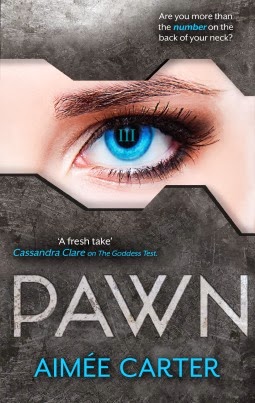 Are you more than a number on the back of your neck?

For Kitty Doe, it seems like an easy choice. She can either spend her life as a III in misery, looked down upon by the higher ranks and forced to leave the people she loves, or she can become a VII and join the most powerful family in the country.

If she says yes, Kitty will be Masked – surgically transformed into Lila Hart, the Prime Minister’s niece, who died under mysterious circumstances. As a member of the Hart family, she will be famous. She will be adored. And for the first time, she will matter.

There’s only one catch. She must also stop the rebellion that Lila secretly fostered. The same one that got her killed...and one Kitty believes in. Faced with threats, conspiracies and a life that’s not her own, she must decide which path to choose – and learn how to become more than a pawn in a twisted game she’s only beginning to understand.

I really love Aimee Carter’s Goddess series, but this sounded completely different and I wasn’t entirely sure. I was pleasantly surprised!

I began reading Pawn in fits and bursts where I could snatch a few minutes to breath between packing boxes and sorting out stuff for my move so it took me a few chapters to sink into Kitty’s story, but once I was in, I was constantly hoping I’d get a chance to go back to it. It was a really nice respite from the stress of my days!

Aimme Carter’s world is really interesting. I though the advances in technology and surgery were amazing – especially Masking – and really quite scary. I do enjoy it when authors take things like that to another level. They way that they enable powerful and twisted families like the Harts immediately set the story up for some great obstacles and villains. I’ve rarely come across a family quite so complex and messed up than the Harts!

Daxton is one of the most vile characters I’ve come across in a long time. He made my skin crawl and I wanted to punch him in the face every time he popped up in the story. I’d say that’s a good sign for Aimee Carter’s characterisation skills! I *think* I like Celia – she’s a very confused and complicated character that I really hope I get to learn more about in the next instalment of the series. Like all YA dystopias, there was a love triangle of sorts. It didn’t feel like one, however. Kitty didn’t really feel torn between the two boys at all and neither did I. Kitty’s boyfriend – I can’t even remember his name... – was very plain and nothing about him really stuck, but Knox is interesting. I couldn’t quite tell where he stood in the rebellion or with Kitty and that really set him apart from most love interests in his genre.

I ended up thoroughly enjoying Pawn and I’m really looking forward to the next instalment, Captive.

Thanks to Mira Ink and NetGalley for the review copy.