On the morning of March 28th Twitter exploded with the news that Stephenie Meyer would be doing a single London signing in the Piccadilly Waterstone’s for the movie release of The Host on Tuesday March 5th. I immediately texted my little sister, Amy, asking if she fancied a trip to London the following Tuesday, I believe her exact response was ‘Hells yeah!’ – couldn’t have put it better myself!

I headed straight over the Waterstone’s events page and waited (im)patiently for details to appear. When they did, I became confused. No tickets? A free for all? They was no way in hell we’d get to see her if I had to wait for Amy to get out of school and then treck up to the city to queue! There would be so many people there! After a brief discussion we decided to give it a shot. She would meet me straight from school at the train station (it’s only five minutes away) and then we’d head straight there.

Amy made the train with a mere three minutes to spare and we were on our way! We arrived in Piccadilly at around twenty past four and followed the long line down the side of the shop and around a corner where we were given our tickets: numbers 86 and 87. I nervously asked the lovely bookseller if it was likely we would get to meet her or if the queue would be cut off before us. She assured us that we’d definitely get our books signed and that they were going to cut off at 200. Amy and I gave a massive sigh of relief and settled in for a long wait. 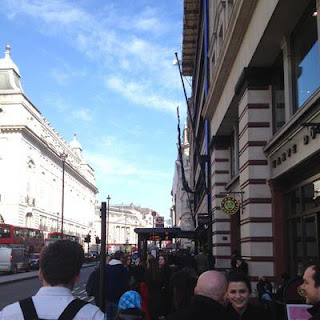 The signing wasn’t going to start until six and I assumed that we’d be waiting for quite a while after it began so at around half five, we were ravenous by this point, I ran off to get us a McDonald’s. Naturally, about thirty seconds after I left, the queue started moving, piling everybody inside to get us all ready to meet Stephenie. I got back to find Amy at the front of the queue, phone in her hand and looking extremely panicked. She’d called me twice and sent me several texts – whoops.

We smoothly filed in to the shop (one of my favourite bookshops ever, by the way) and up the stairs to the sci-fi and crime department on the first floor where a marked off queue section, bouncers and a signing table were set out. At six o’clock, Stephenie Meyer stepped out of the lift to thunderous applause. We tried to join in but we were trying to subtly and quickly stuff down our dinner...

At about twenty to seven, we reached the front of the queue. We were allowed to have The Host dedicated and one other book signed so I took along my battered paperback of Twilight, obviously.

Once I reached her, I told her it was lovely to meet her (I’m so lame...) and as she signed my books I told her that I’d never read sci-fi before The Host as I didn't think I’d like it, but I’d loved The Host. She immediately told me to read Orson Scott Card’s Enders Game and told me that she’d love to read that for the first time again. I thanked her, had my picture taken with her and moved on so Amy could have her turn. She ended up looking like a demon in her photo - bright white eyes and slightly open mouth; it’s hilarious - so she won’t let me have a copy. 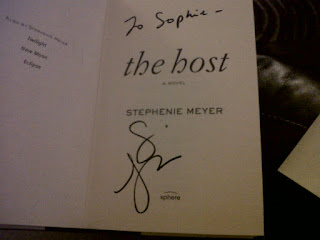 Stephenie was sweet and charming and I’m so glad you lived up to the lofty heights I’d after devouring Twilight when I was fourteen/fifteen.

Although I now have my doubts about The Twilight Saga and I don’t respect them as much as I used to, I did love them. They swallowed me up and I’ve rarely felt about a book how I felt about Twilight when I read it for the first time and they broke open YA as a genre. I will always love the books and Stephenie for that. I’m so, so glad I got to meet her; it’s not an opportunity you get very often.