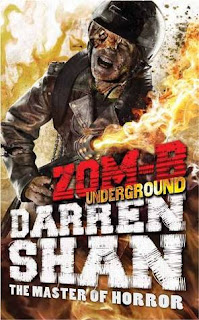 Other Titles in this Series: Zom-B, Zom-B City (March 14th)

B Smith is a zombie, but unlike most of the walking dead, B’s brain still works. At first B thinks this is a blessing, but soon realises consciousness can also be a curse...

A tall man staggers past, face and skull ablaze, trying to slap out the flames but failing. He falls to his knees and shakes his head wildly from side to side, the flames growing thicker, glowing more brightly. And I peg the source of the smell.

With a startled cry, I flail away from the man on fire and glance around desperately for something to quench the flames with.

There’s a small team at the centre of the room – some with flame-throwers, a pair of stun guns, two with spears. They’re surrounded by zombies.

SPOILER ALERT: Although I’ll try not to spoil anything, there may be the odd spoiler for Zom-B.

I was surprised by how much I enjoyed reading Zom-B so I couldn’t wait to get stuck in to Zom-B Underground, and I have to admit that I devoured it in one big gulp.

As I read a proof copy of book one I really loved getting to see the awesome comic-strip endpapers and full=page illustrations in this one. Brilliant! But anyway, on to the review.

Things have changed drastically in the small amount of time since we left B at the end of Zom-B: B is now one of them. But she’s a little different; her brain still functions like it did before. I have to say that I like dead B a whole lot more than I did live B. Removed from her dad’s influence she’s a much better person. She is able to make judgements for herself and her new situation revealed a good heart and a conscience that we glimpsed at the very end of book one. As a victim, of some sort, she has a different perspective, though she still retains her ass-kicking sass and no-nonsense attitude. I like the new B.

B wasn’t the only change between books. The idea of racism which was plainly spelt out and clear to see in Zom-B, while still present, is changed up a little bit as B’s story continues. And it was so, so clever. Even though the zombies are thoughtless monsters, they’re being treated unjustly for something they can’t help and when it’s put that way, the message and correlations couldn’t be clearer. I think it was a much more powerful way to put across the message of racism than the blatant abuse that B and her dad dealt in Zom-B.

Darren Shan delivered some serious bomb shells in the book one so I was wondering whether there would be some of a similar calibre in this, and while they weren't as mind-blowing, there were still some pretty shocking twists. I have a feeling that that might be a Darren Shan trademark. To make of for it though, there was an impossible choice put to B. I have no idea how I would have dealt with that; in fact, I don't even want to think about. Imagine having to choose between doing something against your beliefs or losing yourself and becoming a monster. Unbearable, right?

Zom-B Underground is gruesome, thought-provoking and completely involving. Good job I don’t have long to wait for Zom-B City!

For my 2013 British Books Challenge

Thank you to S&S for providing me with a copy for review!