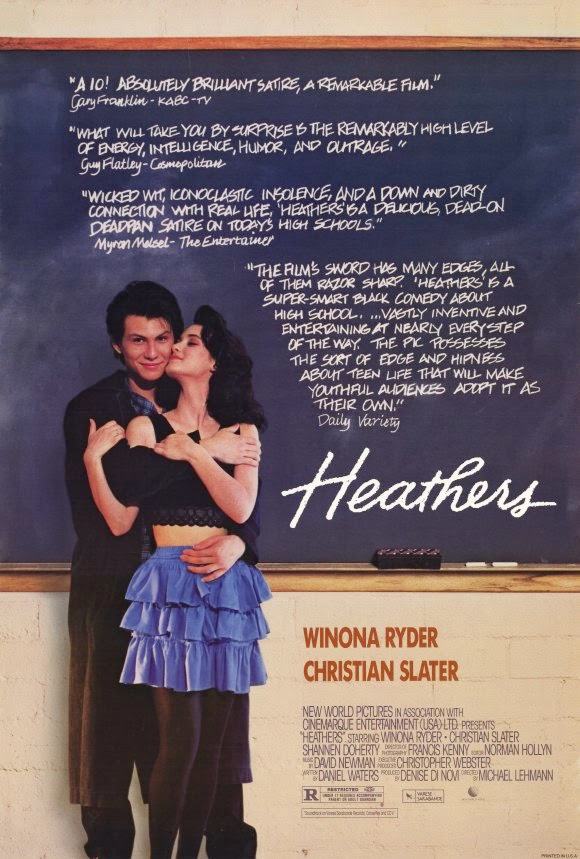 WHAT’S IT ABOUT?
(from imdb.com)
A girl who half-heartedly tries to be part of the “in-crowd” of her school meets a rebel who teachers her a more devious way to play social politics: killing the popular kids.

I have to admit that I had no idea what Heathers was about. I had heard that it was an 80s version of Mean Girls and that it was awesome, and though I totally agree on the awesome, it was so not what I was expecting!

Heathers is extreme. The 80s is in full force with the hair, the outfits and the music and it’s something quite spectacular; so are the characters. Though we don’t get to see much of Heather Chandler, she is clearly the inspiration for Regina George, and she’s way worse. Her comeuppance is suitable dramatic. I was totally not prepared for the murder – it took me completely by surprise!

I loved how entitled, sassy, selfish and downright powerful the Heathers were; it intensified their every action and reaction. Heathers depicts high school as a severe microcosm of society in the pressures of popularity, fitting in, the divisions between class and social standing and it’s almost shocking in its forcefulness. Add in the brilliantly deranged JD and so relatably teenage Veronica struggling to find their way and you really have a winner.