BLOG TOUR: Playlist for Louder Than Words by Laura Jarratt 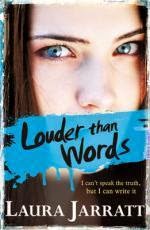 I'm a huge fan of Laurs Jarratt's books so I'm really excited to be kicking off the blog tour for Louder Than Words. Over to Laura with the songs that helped her write the novel!

This is the only book I have ever truly written to a soundtrack. Some books have to be written with noise in the background and some have to be written to silence. This one however, which is interesting considering Rafi’s issues with silence, had to be written to a specific soundtrack that actually shaped the book. I needed these songs both for inspiration and in one case to define the end of the book. Many of them helped me to connect with particular characters. Dillon especially was formed from listening to some pivotal New Model Army tracks. So for once it wasn’t about background noise for me – these songs really are the soundtrack for Louder Than Words.

This really is for Lara in the first instance and then for the rest of ActionX. I’d like to play this to them. This was a shaping song for the direction I took for ActionX. What I love about New Model Army is that they’d get totally behind the ActionX ideals etc but they’ll make music about the dangers of that kind of mentality too. These lines sum up Lara at her worst:
‘We've seen the restless children at the head of the columns
Come to purify the future with the arrogance of youth
Nothing is as cruel as the righteousness of innocents
With automatic weapons and a gospel of the truth’
(Though when Lara is at her best, I am very fond of her as a character.)
PS You’ll have to ignore the hair in this video – it’s an oldie. Er, Justin’s teeth are
best ignored too!

The Levellers What a Beautiful Day
http://www.youtube.com/watch?v=5SKS_xcBS5w

This one evokes Silas and Lara’s early dates, and is the song that gets me to Lara at her angry anarchist best.


Another Lara song, but this time it’s one she would listen to herself. It’s about our treatment of those we keep on the outside of the wealth in our developed world.

Silas…I don’t think this one needs any explanation

Another Lara song, which would be a favourite of the whole of ActionX too. The sad thing about this song is it was written in 1992…but it could have been today. Nothing has changed.

This is my Rafi song. It’s not always the lyrics with this one, although some fit her, but more the overall feel
(Although I think the video is lame – listen to it without looking)

This song is very much about Dillon. There’s a link here to the lyrics on NMA’s site:
http://www.newmodelarmy.org/index.php/the-music/lyrics/143-fate


LMFAO, Sexy and I know It
http://www.youtube.com/watch?v=wyx6JDQCslE

I’d play this to Toby. Now this is one you do have to watch with the video to get it. I suspectRafi would like to play it to Toby too, with a raised eyebrow and a snarky smile.

This is the absolute definitive Dillon song, and a warning to the rest of ActionX. The lyrics are really important and are here at:
http://www.sing365.com/music/lyric.nsf/Lust-For-Power-lyrics-New-Model-Army/2D2447CE34C4B7BA48256C5A0027EAC5

Tom Odell, Another Love
http://www.youtube.com/watch?v=MwpMEbgC7DA
Before I kept hearing this song on the radio, the ending of Louder Than Words was different. By the time I’d heard this song about ten times, I realised it was telling me something about Silas and about the end of the book should be. I love this song. Rafi would love it too for it’s a very true song.

Thanks Laura! Make sure to check out the rest of the tour and pick up a copy of Louder Than Words. And you might as well get Skin Deep and By Any Other Name while you're at it. You won't regret it!

Sophie
Posted by So Many Books, So Little Time at 17:44
Email ThisBlogThis!Share to TwitterShare to FacebookShare to Pinterest