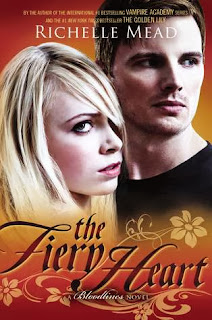 In The Indigo Spell Sydney was torn between the Alchemist way of life and what her heart and gut were telling her to do. And in one breathtaking moment that Richelle Mead fans will never forget, she made a decision that shocked even her...

But the struggle isn’t over for Sydney. As she navigates the aftermath of her life-changing decision, she still finds herself pulled in too many directions at once. Her sister Zoe has arrived, and while Sydney longs to grow close to her, there’s still so much she must keep secret. Working with Marcus has changed the way she views the Alchemists, and Sydney must tread a careful path as she harnesses her profound magical ability to undermine the way of life she was raised to defend. Consumed by passion and vengeance, Sydney struggles to keep her secret life under wraps as the treat of exposure – and re-education – looms larger than ever.

Pulses will race throughout this smouldering fourth instalment of the New York Times bestselling Bloodlines series, where no secret is safe.

With ever book by Richelle Mead comes a healthy dose of love, smoulderings, fear, excitement and horror, and The Fiery Heart delivered on all areas.

The Fiery Heart looked at Sydney and Adrian’s story at a slightly different angle with the introduction of chapters from Adrian’s point of view. Oh, yeah. Among the deepest, darkest thoughts of Adrian Ivashkov lie some rather questionable ideas, horrific jokes and a man very much in love. It was excellent. And eye-opening. Adrian, of course, is a Moroi, and a royal one at that so we got to see that side of this world that we’ve actually only ever seen from a dhamphir’s perspective and a human Alchemist (and maybe **VAMPIRE ACADEMY SPOILER ALERT** Strigoi Dimitri, I can’t quite remember (**SPOILER FINISHED**). It was really interesting to see that side of things because honestly, I kind of forget that the Moroi are vampires. I’m so familiar with the world that I take the flipped day schedules, feedings and powers in my stride and rarely consider what they actually are. But this time we did. Through Adrian, a little of his relationship with blood came through, and lots of his relationship with spirit.

Magic was a topic more thoroughly explored in The Fiery Heart, both human and vampire. Sydney’s grasp, knowledge and love of magic are a far cry from the girl who started the Bloodlines series. I love watching her achieve more and more feats of fantasy and her confidence grow as she learns. Then came Adrian’s torment over spirit. It was fascinating to hear about how it affected him, before and after he used it, as well as the compulsion to do so. It was actually kind of heart-breaking at times. Magic in this world is a powerful, scar and wonderful thing that will probably end up saving some lives in the next book, as well as the dire situation the gang were left in...

I think it’s safe to say that with the ending of The Fiery Heart came a broken and rageful heart for me. After the trauma brought b Shadow Kiss, book three in the VA series destroyed me; I was expecting the book before The Fiery Heart in this series to be the killer. Nope. Why does Richelle Mead’s evil still surprise me...? I have to admit that there were moments during the book when I thought to myself ‘This is going to explode. Something is going to go horribly, horribly wrong’ and yet I certainly didn’t expect that. Quite frankly, it’s a relief that there’s not the usual year until the next book; Silver Shadows will be released July 29th next year.

I can’t wait to have my heart shattered by Richelle Mead and her devious writings, Shakespearian romantic entanglements, hilarious one-liners and endlessly lovable characters once again. Bring on book five!