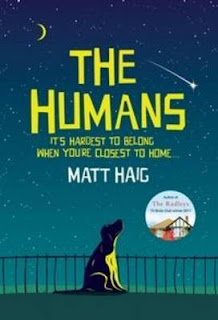 Other Titles by this Author: The Last Family in England, The Dead Father’s Club, Samuel Blink and the Forbidden Forest, The Runaway Troll, The Radleys, To Be a Cat

It’s hardest to belong when you’re closest to home...

When he is found walking naked along a motorway, Professor Martin seems different. Besides the lack of clothes, he now finds normal life pointless. His loving wife and teenage son seem repulsive to him. In fact, he hates everyone on the planet. Everyone, that is, except Newton. And he’s a dog.

Can a bit of Debussy and Emily Dickinson keep him from murder? Can the species which invented cheap white wine and peanut butter sandwiches be all that bad? And what is that warm feeling he gets when he looks into his wife’s eyes?

The premise of The Humans is both startlingly original and completely obvious and it drew me right in!

The new version of Andrew Martin that narrates The Humans made me think about just how damn weird we humans are. Our rules and regulations, spoken and unspoken, are strange and even a little unnatural; our actions make no sense most of the time; we can be pretty damn stupid; but we’re also pretty wonderful because of that. The kind of everyday things that we do, say and think on a daily basis are given a new light in a way that only through the eyes of an alien would be see.

To give you a taste of the brilliant humour in The Humans: when the alien that takes over Andrew’s body first arrives on earth he reads a copy of Cosmo. That is what he initially bases his ideas of love, sex and relationships on. Naturally, some mishaps ensue. Watching him learn the confusing ways of the world was so endearing and occasionally frustrating, especially involving his new family.

The Humans is thoughtful, hopeful and honest and I loved every page. I now plan to go and devour Matt Haig’s backlist while I wait for his next book.

Thanks to NetGalley/Cannongate for the review copy. However, it wouldn’t download so I had to buy it!