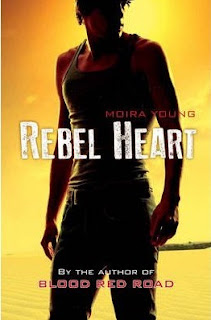 Other Titles in the Series: Blood Red Road

There’s a price on Saba’s head.

They call her the Angel of Death. She defeated a tyrant, but victory has come at a cost. Haunted by the ghosts of her past, she needs Jack. His moonlit eyes, his reckless courage, his wild heart. But Jack has left, and a ruthless new enemy searches for Saba across the Dustlands...

Blood Red Road was not just one of my reading highlights of last year, but also one of the best books I’ve read in years so I was incredibly nervous and excited to have a copy of Rebel Heart in my hands.

I was quite hesitant when I started Rebel Heart; it had a lot to live up to and I really, really wanted to love it, and I did, just not quite on the same level that I did Blood Red Road. That began with the initial shock of a brief narration from Jack, but as the novel progressed, I realised why it was essential – and it caused me some serious internal debate.

And then Saba was back, but she was different. Her trademark stream of consciousness narration was as stark and beautiful as when I’d fallen in love with it in the first book and the dialect really transports me to another world; Saba’s world. But Saba was broken and tormented by the events of Blood Red Road and the ache of the absent Jack was only making it worse. My heart broke for her. All I wanted was for her to be reunited with Jack and to be rid of her demons, and there were moments when I doubted that either of those things could possibly happen with the way that things were going.

There were some incidents surrounding Jack, when he wasn’t even present, that made me gasp aloud. I was shocked and didn’t quite know what to do with myself, as was Saba. In her confusion she made some decisions that I couldn’t quite comprehend and that I think are going to have serious repercussions in the final book in the Dustlands trilogy and, honestly, I’m worried. I have a feeling that some serious action and drama is going to go down as Saba’s story winds to a close...

Even though Rebel Heart didn’t quite live up to Blood Red Road, it still completely delivered in style, drama and action and I loved it. Bring on book three is all I can say really.

For my 2012 YA Dystopia Challenge

Thank you to Scholastic for providing me with a review copy.