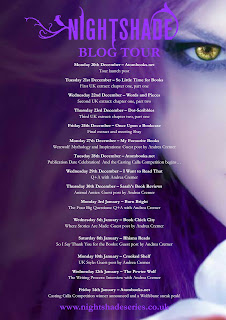 Today I have the exclusive first part of the first chapter of Andrea Cremer's fantastuc debut novel, Nightshade, to share with you. Enjoy!
I’d always welcomed war, but in battle my passion rose unbidden.
The bear’s roar filled my ears. Its hot breath assaulted my nostrils, fueling my bloodlust. Behind me I could hear the boy’s ragged gasp. The desperate sound made my nails dig into the earth. I snarled at the larger predator again, daring it to try to get past me.

What the hell am I doing?

I risked a glance at the boy and my pulse raced. His right hand pressed against the gashes in his thigh. Blood surged between his fingers, darkening his jeans until they looked streaked by black paint. Slashes in his shirt barely covered the red lacerations that marred his chest. A growl rose in my throat.

I crouched low, muscles tensed, ready to strike. The grizzly rose onto its hind legs. I held my ground.
Calla!

Bryn’s cry sounded in my mind. A lithe brown wolf darted from the forest and tore into the bear’s unguarded flank. The grizzly turned, landing on all fours. Spit flew from its mouth as it searched for the unseen attacker. But Bryn, lightning fast, dodged the bear’s lunge. With each swipe of the grizzly’s trunk-thick arms, she avoided its reach, always moving a split second faster than the bear. She seized her advantage, inflicting another taunting bite. When the bear’s back was turned, I leapt forward and ripped a chunk from its heel. The bear swung around to face me, its eyes rolling, filled with pain.

Bryn and I slunk along the ground, circling the huge animal. The bear’s blood made my mouth hot. My body tensed. We continued our ever-tightening dance. The bear’s eyes tracked us. I could smell its doubt, its rising fear. I let out a short, harsh bark and flashed my fangs. The grizzly snorted as it turned away and lumbered into the forest.

I raised my muzzle and howled in triumph. A moan brought me back to earth. The hiker stared at us, eyes wide. Curiosity pulled me toward him. I’d betrayed my masters, broken their laws. All for him.

My head dropped low and I tested the air. The hiker’s blood streamed over his skin and onto the ground, the sharp, coppery odour creating an intoxicating fog in my conscience. I fought the temptation to taste it.

Calla? Bryn’s alarm pulled my gaze from the fallen hiker.

Get out of here. I bared my teeth at the smaller wolf. She dropped low and bellied along the ground toward me. Then she raised her muzzle and licked the underside of my jaw.

What are you going to do? her blue eyes asked me.

She looked terrified. I wondered if she thought I’d kill the boy for my own pleasure. Guilt and shame trickled through my veins.

She whined but slunk away, slipping beneath the cover of pine trees.

I stalked toward the hiker. My ears flicked back and forth. He struggled for breath, pain and terror filling his face. Deep gashes remained where the grizzly’s claws had torn at his thigh and chest. Blood still flowed from the wounds. I knew it wouldn’t stop. I growled, frustrated by the fragility of his human body.

He was a boy who looked about my age: seventeen, maybe eighteen. Brown hair with a slight shimmer of gold fell in a mess around his face. Sweat had caked strands of it to his forehead and cheeks. He was lean, strong—someone who could find his way around a mountain, as he clearly had. This part of the territory was only accessible through a steep, unwelcoming trail.

The scent of fear covered him, taunting my predatory instincts, but beneath it lay something else—the smell of spring, of nascent leaves and thawing earth. A scent full of hope. Possibility. Subtle and tempting.

I took another step toward him. I knew what I wanted to do, but it would mean a second, much-greater violation of the Keepers’ Laws. He tried to move back but gasped in pain and collapsed onto his elbows. My eyes moved over his face. His chiselled jaw and high cheekbones twisted in agony. Even writhing he was beautiful, muscles clenching and unclenching, revealing his strength, his body’s fight against its impending collapse, rendering his torture sublime. Desire to help him consumed me.

I can’t watch him die.

I shifted forms before I realized I’d made the decision. The boy’s eyes widened when the white wolf who’d been eyeing him was no longer an animal, but a girl with the wolf’s golden eyes and platinum blond hair. I walked to his side and dropped to my knees. His entire body shook. I began to reach for him but hesitated, surprised to feel my own limbs trembling. I’d never been so afraid.
A rasping breath pulled me out of my thoughts.

“Who are you?” The boy stared at me. His eyes were the colour of winter moss, a delicate shade that hovered between green and gray. I was caught there for a moment. Lost in the questions that pushed through his pain and into his gaze.
I raised the soft flesh of my inner forearm to my mouth. Willing my canines to sharpen, I bit down hard and waited until my own blood touched my tongue. Then I extended my arm toward him.

“Drink. It’s the only thing that can save you.”
I promise you that it gets even better, though you're probably wondering if that's possible! Look out for my review at the end of the week to see just how much I loved this.
Sophie
Posted by So Many Books, So Little Time at 13:49
Email ThisBlogThis!Share to TwitterShare to FacebookShare to Pinterest