Have a Little Faith - Candy Harper 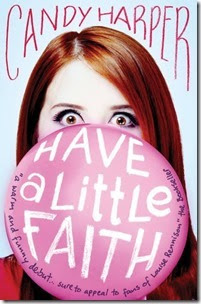 Other Titles by this Author: The Disappeared (as CJ Harper)

Year Ten has just begun and I’m already in trouble.

The way Miss Ramsbottom acts you’d think I’m always causing explosions or giving teachers radical haircuts (whereas it was just one time). And now she’s separated me from my best friend, Megs, which means I have no one to give me piggy backs or check for dangly bogies.

At least the school is trying to make amends by bussing in boys for our choir. So I can start at dreamy Finn until he realises I’m the girl for him...except he’s singing a duet with my sworn enemy and her bog head keeps blocking my view.

Fortunately, I’ve got a plan to solve both problems; as long as I’m careful with the squeezy cheese and the underage driving everything should be just fine...

I was so surprised to hear that CJ Harper was moving onto funny contemp after her dystopian thriller debut and I just wondered how on earth it would work. I was rather ecstatic with the result; Have a Little Faith is wonderful.

Told in diary entries, Have a Little Faith has a feel of the Georgia Nicolson’s about it. Faith’s hilarious exploits at school with her three best friends and the chaos that ensues when their choir joins forces with the boys school next door threw me straight back to thirteen-years-old and falling in love with Georgia and the Ace Gang. Lots of UK contemp that’s even slightly funny is compared to Louise Rennison, but Candy Harper genuinely evokes the same violent laughter (and occasionally snorting) as her characters make fools of themselves, have crazy crushes and you inevitably fall in love with them. I don’t equate books to the Georgia Nicolson series easily, but Have a Little Faith made me think of it immediately.

Have a Little Faith is a sharp departure from Harper’s debut The Disappeared (as CJ Harper) and it felt like a whole other person writing it. It was brilliantly funny, so realistic and I just, I just fell in love with it okay. I felt like I was right there with Faith and I want to go back. Even if she is a bit precocious and annoying at times. She’s awesome. Her, Megs, Lily and Angharad were all fantastic characters and so sharply different and fully characterised. I loved that their friendship was three-dimensional and they had ups and downs as any friendship would.

In conclusion, I want more. Have a Little Faith has swung into my favourites of 2013 and I’m already counting down the days until book two.

Thanks to S&S for sending me a copy for review!